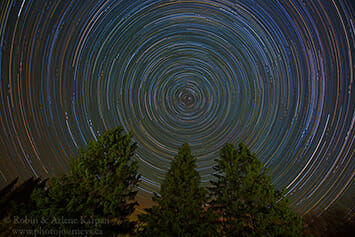 
This week we’re highlighting a Getting the Shot segment. It’s a behind-the-scenes look at a specific photograph and what was involved in getting the image – why we took it, what attracted us to the scene, and technicalities such as camera settings and processing in putting it all together.

Of all of the photos we can take of the night sky, star trails can yield the most surprising results. It’s a view of reality, though not something we can see at one moment in time. This photo was taken over a span of about 2.5 hours. As the Earth rotates the stars become streaks of light – except for Polaris, the North Star, which stays stationary. We took this shot in the front yard at our farm, which was convenient since it was possible to simply leave the camera running, go to bed, then pick it up in the morning.

The best news is that star trails are fairly easy to take, and with less need for specialized equipment than most other types of night photography. When we want stars to be points of light, as we see them with our eyes, there are more constraints. Because of the rotation of the Earth, the shutter speed has to be short enough so the stars don’t blur, so a full-frame camera with a wide-angle lens capable of wide apertures such as f/2.8 usually work best. But for star trails, we don’t have to worry about that since we want the stars to be stretched out. So practically any camera and lens combination, along with a tripod, can do the job. However, the wider the focal length of the lens (such as 14mm, 20mm, etc.) and the “faster” the lens (capable of wider aperture settings) the better.

Star trail photography is also very forgiving. There is no exact measurement as to how long the exposure should be. It can be a half-hour, hour, three hours, whatever. In shorter exposures, the stars will look more like a series of short curved lines, whereas longer exposures will look more like complete circles. The longer the exposure, the more variations of colours of stars we can see.

Take a series of images

When we used to take star trails with film cameras, the only way to do it was with one very long exposure. While it is possible to do that with digital cameras, it’s riskier because if something goes wrong in the middle of the shot (the wind shakes the camera, a car drives by and the headlights interfere, etc.), the entire photo is ruined. It’s more common today to do a series of shorter exposures, then put them together in Photoshop or other software. The software we usually use is Sequator, which is free to download and easy to use. For the above photo, if a car had driven by and the headlights interfered with the scene, we would have had the option of simply leaving out that frame.

If your camera has a built-in intervalometer (allowing you to program a series of shots and set the duration), simply set it to take a series of 30-second exposures (the longest shutter speed most cameras are capable of) for as long as you want. If your camera doesn’t have a built-in intervalometer, you can buy one that attaches to your camera fairly inexpensively. An advantage to external intervalometers is that they aren’t constrained to 30 seconds as most cameras are. You can set any duration shutter speed you like. We like to use a series of 3-minute exposures. This longer exposure allows a lower ISO setting which results in less noise, plus we find that it also brings out more colours in the stars.

Exactly what settings to use will vary as to the setting and light conditions, as well as your camera equipment. Aim for the lowest possible ISO setting while still getting a bright enough exposure. A big benefit of doing a series of shorter exposures is that it is easier to do a few test shots and adjust the settings until you get the exposure you’re happy with before setting the camera to run for half the night.

Other points to consider 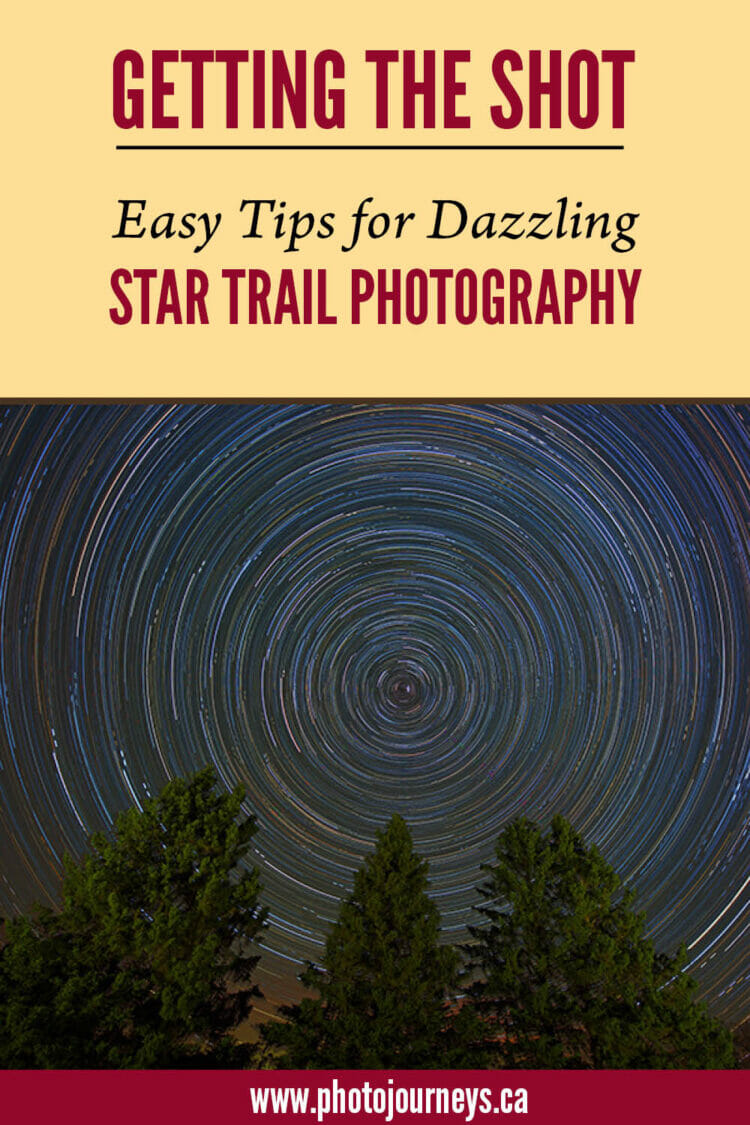