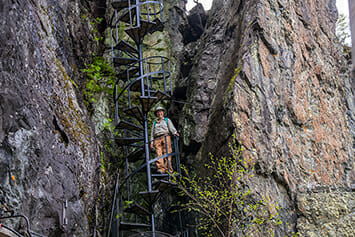 In the previous posting we looked at an introduction to Parc National d’Aiguebelle in western Quebec – a scenic forested wilderness where we stayed in a wonderful rustic log cabin beside a small lake. The park’s premier attraction is its network of over 30 km of hiking trails, ranging from easy strolls to difficult excursions.

This time we’ll take a closer look at our favourite three trails – the first two of which the park identifies as its signature must-do walks. All three are rated as “Intermediate” in difficulty. There is nothing technically difficult about any of these, but there is a lot of up and down with gain and loss in altitude and some clambering over rocks. Although the trails are very safe if you stick to the path, those with a fear of heights may feel a bit challenged.

The 3.5-km loop, with 160 metres of elevation gain, runs along both sides of long, narrow Lac La Haie. The centrepiece of the trail is the impressive suspension bridge crossing the lake about halfway along. Not only is this bridge “the” scene anytime we see photos of the park, it is also features prominently as a symbol for the entire Abitibi-Temiscamingue region of Quebec.

Near the beginning of the trail, we pass beside a scenic set of rapids and small waterfalls, then start climbing gradually. As we gain height, there are some marvellous viewpoints along the deep canyon, lined by sheer reddish-tinged cliffs. Suddenly we come to the entrance to the bridge, suspended high above the lake, and with sweeping views both up and down the canyon.

The path on the other side of the lake is a bit more rugged and rocky, but nothing difficult. There more excellent viewpoints with benches, and one even has a picnic table in case you want to have your picnic lunch with a million dollar view.

One stop is called the Giant’s Kettle where you see the largest of several kettle formations in the park. These are round or cylindrical caverns that formed ages ago by glacial action. Water and debris swirled around by melting glacial water to such an extent that a deep pothole formed. Now it is filled with water looking like a pool.

This 2-km loop takes us along the rocky escarpments near Lac Sault. There’s an elevation gain of 110 metres, but the big surprise is how we come back down.

The trail takes us through forested hills and we continually climb up with viewpoints along the way. At the summit we arrive at a cliff-top with a sheer vertical drop. To get down, we take a spiral staircase affixed to the rock wall! It’s one of the most innovative features we have ever seen on a hiking trail.

After the staircase, we descend further down a several sets of stairs with seemingly countless steps, then across water along a floating boardwalk adjacent to the lakeshore. Then it’s a few more ups and downs to get back to the trailhead.

This 2-km trail, with an elevation gain of 110 metres, takes us to a high point of land which is the site of an former fire warden’s tower. You can even climb the tower if you like. It’s a steady but gradual route, with interpretive panels along the way talking about the role of fire in the ecosystem, fire-fighting in the forest, and the typical day in the life of a fire watcher.

The fire tower originally stood 30 metres high when it was used, but was cut down to 10 metres – presumably to lessen the risk to curious tourists who feel compelled to take the ladders to the tiny cabin perched on top. It’s still a bit of climb to get to the top where there are sweeping 360 degree views, and vintage posters of the early days of fire fighting.

See the park website for more information on Aiguebelle National Park. For more details on the park and other attractions in the area, see Abitibi-Teminascaming Tourism.