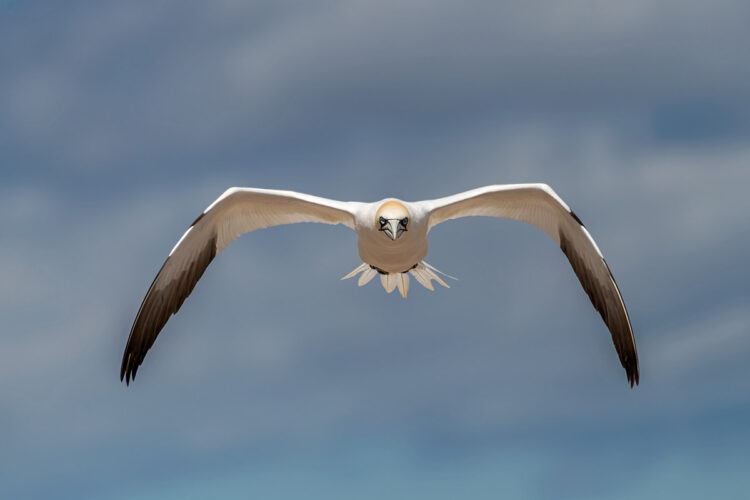 It feels as if we are taking part in a wildlife documentary. Our boat bobs in the swells off the 75-metre-high cliffs of Quebec’s Bonaventure Island as thousands of birds fill the air around us. Brilliant white northern gannets and various other seabirds are scattered along the narrow cliff ledges. More birds perch on practically every available rock along the shore, except for those already claimed by lounging grey seals. As exciting as this encounter is, the best is yet to come when we arrive at the main gannet nesting colony at the top of those cliffs.

Visiting Bonaventure Island ranks among North America’s great wildlife adventures. The best part is that it’s easy to get to. The island sits about four kilometers offshore from Percé on the eastern edge of Quebec’s Gaspé Peninsula. The town’s claim to fame is Percé Rock, an imposing limestone island reaching 85 metres high, close to a half-kilometre long, and pierced with a 30-metre-wide hole. So a visit here becomes a two-for-one special – experiencing one of the most iconic landmarks along Canada’s east coast plus an unforgettable wildlife extravaganza.

While the island is only a few minutes away by boat, our outward journey takes an hour as we slowly pass Percé Rock on both sides for a close look at this imposing monolith. Approaching nearby we can see that it too hosts a sizeable number of seabirds that cloud the air as they come and go to their nests.

The highlight of our boat trip with Les Bateliers de Percé is circling Bonaventure Island, accompanied by a commentary in French and English. The island was noted by explorer Jacques Cartier in 1534, and over the years it played an important role in the cod fishery. In 1919, the Bonaventure Island and Percé Rock Migratory Bird Sanctuary was established to protect seabird nesting sites. Today the entire island is protected in Parc national de l’Île-Bonaventure-et-du-Rocher-Percé. No one lives here any longer, although some houses still remain.

The numbers of northern gannets are staggering — over 100,000 — making it the largest northern gannet colony in North America and among the largest and most accessible in the world. While gannets steal the show, 218 bird species have been recorded, including sizable numbers of seabirds such as common murres, black-legged kittiwakes, black guillemots, razorbills, among others.

We see many of those species as we slowly cruise by the cliffs, especially black and white common murres that prefer nesting on cliff ledges and slopes.

The boat docks at the only low spot on the island. After a brief orientation from park staff, we’re free to explore. We can stay as long as we want, but we must be back in time to catch the last boat to Percé. The area near the dock has a few old buildings with a small restaurant, picnic sites, and washrooms. Fifteen kilometers of trails wind through the island, but like most visitors we’re taking the slightly less than three-kilometre walk to the opposite side of the island to the main gannet colony. It’s a pleasant, easy walk through mostly forest and small meadows, but uphill all the way.

At the gannet colony

We hear, and smell, the gannets before we see them. Throaty, vibrato “arrrr” sounds mix with a variety of clacking noises. Our first glimpse of the nesting colony is breathtaking as thousands of tightly packed white dots sprawl across the gently rolling land above the cliffs that we passed on the boat trip.

The nesting grounds are roped off but we can get within 10 metres or so. An observation deck sits right above the colony. Getting close enough for photography isn’t an issue. We’re told by park staff that this is the closest we can get to northern gannets anywhere in the world. The birds continue going about their business, totally oblivious to gawking visitors and clicking cameras.

Getting up close and personal with one of the largest seabirds in the North Atlantic is a rare privilege. It gives us a chance to see and photograph the details of this magnificent bird, mostly snowy white with a splash of gold on the head and neck, and black flight feathers on long slender wings spanning close to two metres. Its piercing eyes are ringed in sky blue, and thin black lines run from the eyes to the dagger-like bill.

Most fascinating is watching and capturing some of the intricate behavior. A mating pair will greet each other when one returns to the nest, engaging in “fencing” where they extend their necks and shake their heads and clack their bills together. Parents take turns at the nest, and when one stretches up its head, pointing skyward, the message is usually “Hey, get back here. It’s my turn to go fishing.”

Nesting is in full swing during our early summer visit, with some birds wandering along the grassy edges of the colony to bring back huge mouthfuls of grass. Others head farther afield to collect seaweed.

Our favourite behaviour is watching the gannets land. It can be tricky to manoeuvre in such crowded conditions with little open space. Often they try to hover to get lined up and then drop into place. Squabbles might break out when nesting neighbours get too close for comfort.

We have a chat with Jacques, one of the park employees on-site to answer visitors’ questions. He tells us that there are around 125,000 gannets here now, in addition to other seabird species. Numbers fluctuate from year to year. Warming waters have proven challenging for the birds. Capelin, herring, and other fish they prefer often migrate farther north to colder waters, so the gannets must fly farther to fish and bring back food for the chicks. If it takes too long to return with food, they could abandon the chicks.

On the positive side, numbers have been gradually increasing by one to two percent per year since around 2015, as the gannets have adapted by changing their diets to more squid and other nearby species. The birds winter around Florida and the Gulf of Mexico, returning here in early April to start nesting. Eggs are incubated for 45 days and hatch by late June to mid-July. Near the end of October, they’re all gone.

We’re thrilled with our experience and are sad that it’s over. But as we pack up to leave Percé, we find that the gannets aren’t quite through with us yet. Carrying our bags to the car from our beach-side Fleur de Lys Hotel, we watch the lobster boats cruise by, then notice the sky just offshore coming alive with gannets. And they’re fishing. Few birds can match the gannet’s dramatic fishing style, so we pour another coffee, grab lawn chairs from the hotel, and sit near the beach to watch the show.

The gannets’ wide wing spans are tailor-made for soaring, but when they spot a fish, often from high in the air, they fold back those huge wings, stretch their heads forward and become streamlined dive-bombers. Plunging from the sky at speeds approaching 100 km/hour, they slice through the water and use both their feet and wings to swim underwater to snatch a fish. It’s a mesmerizing sight as we see bird after bird hit the water, sending up great splashes as they disappear into the depths. To top off the spectacle, a couple of Minke whales surface nearby. This was a hard place to leave.

Boat trips run from about mid-May to mid-October, with departures throughout the day, with more trips during mid-summer. Your ticket allows you to take any boat for the return journey, so you can spend all the time you want on the island as long as you’re back in time to take the last boat to Percé.

For avid photographers, we suggest taking the first boat in the morning and staying until the last boat returns. It takes at least an hour to go through the park orientation and walk across the island to the gannet colony. And you have to allow time for the return walk. With all the activity, time goes by quickly. Pack a lunch to have at the picnic site overlooking the colony.

For bird photography, it’s usually a simple choice of taking the longest lens you have, although here it’s less essential. We used our 150-600mm zoom a lot, especially for birds in flight and for individuals farther away. But because we could get so close, we took a surprising number of shots with our 70-200mm f/2.8 lens. It had plenty of reach for the closer birds and the wider aperture made it easier to get sharp bird images but throw the background out of focus. A wide-angle lens is also useful to capture the grand scene of nesting birds. Don’t worry if you don’t have specialized photo equipment. This is a rare place where almost any camera and lens can provide good results.

While the viewing platform is fine for taking overview shots of the gannet colony, we found the best spots were along the grassy areas to the side of the platform where it is possible to sit or even lie on the ground for eye-level shots.

Feel free to PIN this posting on Wildlife Adventure with Gannets on Bonaventure Island, Quebec 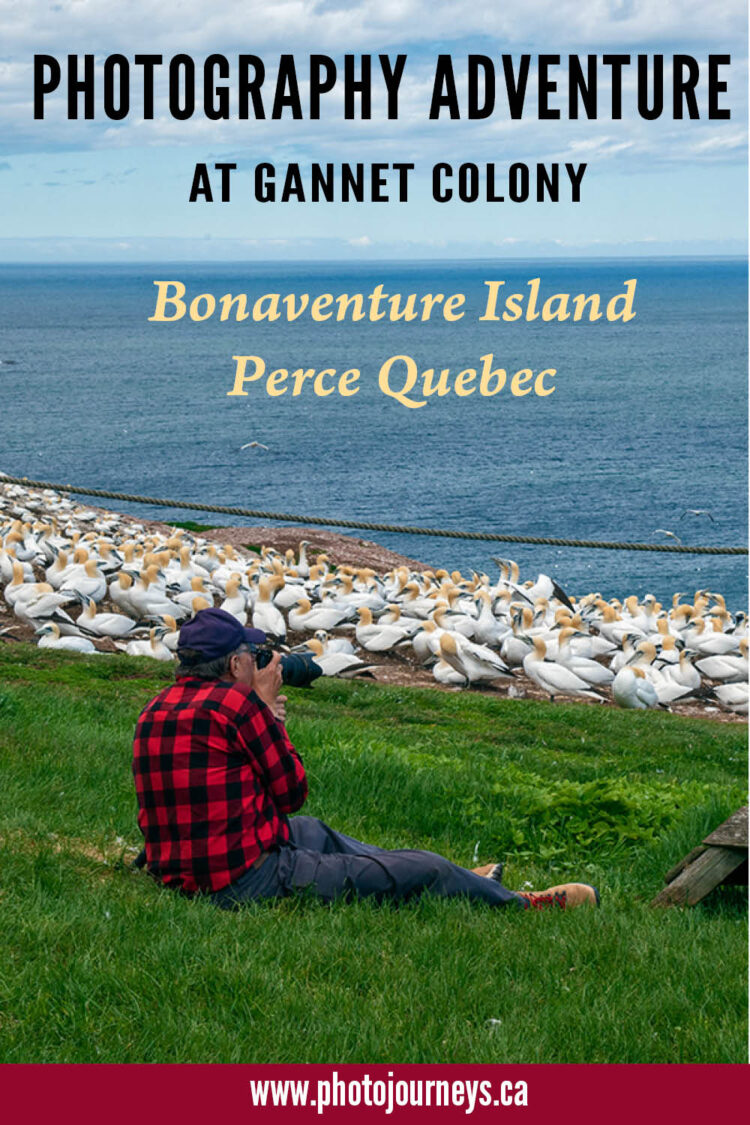 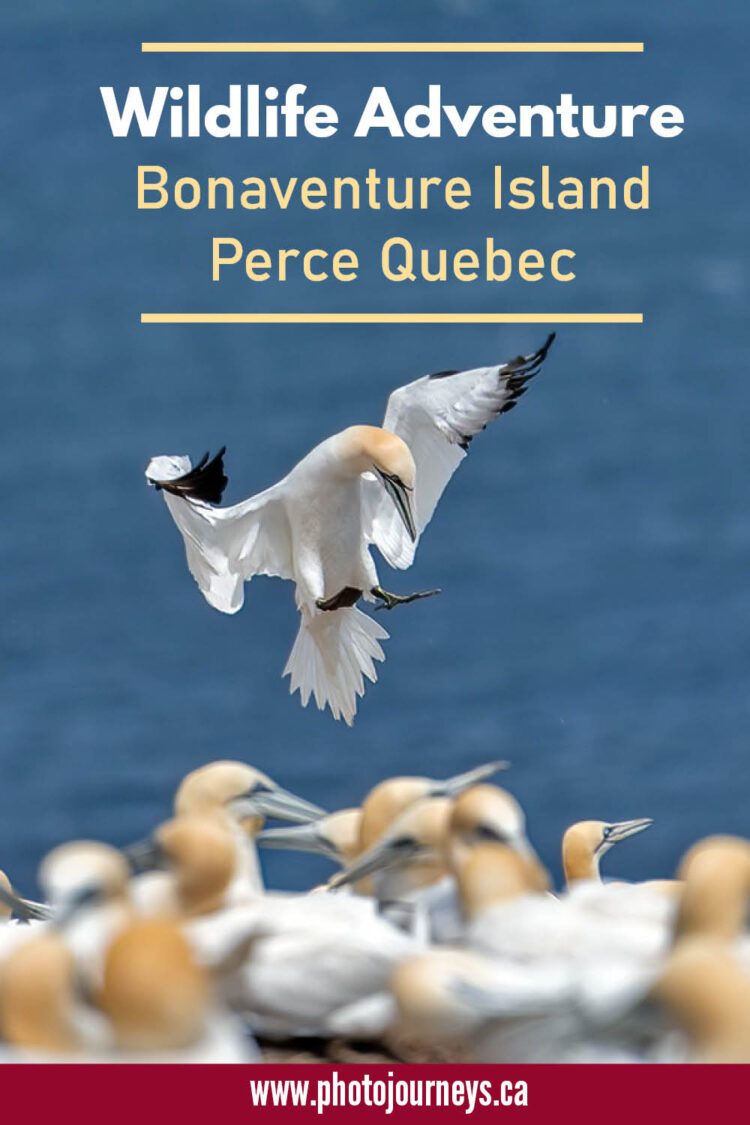