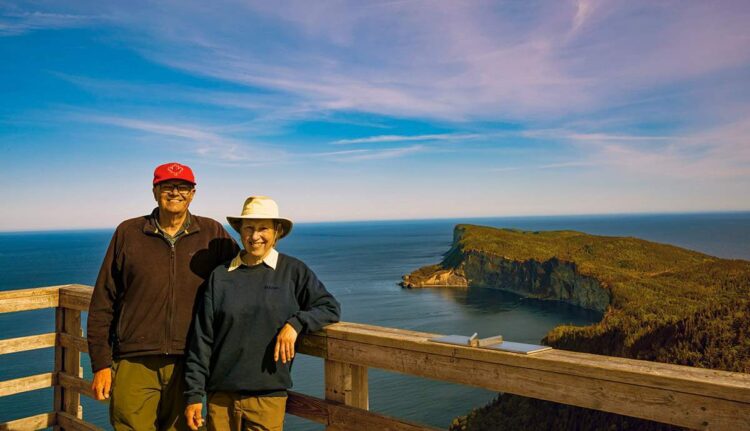 What’s making that strange sound we kept asking ourselves? Hiking near the shoreline of Quebec’s Forillon National Park, we could hear faint grunting and moaning noises somewhere in the distance. We knew that bear, moose, and other critters abound in the park, but the sound didn’t seem to match anything we were familiar with. Then as we got a clear view over the water it suddenly made sense, as we gazed over several Minke whales surfacing and making the odd sounds, not far off shore. That was just one of many delights that waited us while hiking in this remarkable park.

Forillon National Park juts into the northeast point of Quebec’s Gaspé Peninsula, boasting heavily forested hills, breathtaking cliffs, wildlife galore, and gorgeous views at every turn. For an introduction to the park, see our posting 7 Must-do activities in Forillon National Park. One of those must-dos is hiking, so this time around we devote our attention to hitting the parks amazing trails.

While Forillon has everything from short strolls to challenging backcountry adventures, these three trails are our favourites. All are rated as intermediate in difficulty, making them accessible to most visitors. Combined together, they highlight a wide range of the park’s outstanding scenery.

Length: 8 km round trip (It could be longer if you start at a trailhead before the end of the road, or slightly shorter depending on the route taken.)
Elevation gain: 80 metres.

The trail runs close to the shoreline with a mix of forest and open meadows, ending at Cap-Gaspé where a lighthouse sits atop a 95-metre-high cliff. The main trail is part of an old road, with a number of optional side trails that take you closer to the water’s edge. Besides non-stop seaside scenery, this route provides one of the best possibilities of seeing whales and other marine mammals. This is where we encountered Minke whales. They were moving slowly parallel to the shore and travelling in the same direction as we were, so we kept spotting them throughout much of the walk.

Minke whales spend much of the summer in the waters around Gaspé. They can grow up to 10 metres long and weigh around 20 tons. Their body is black or dark grey, and they are frequently seen alone or in small groups, diving every few minutes to feed on schools of fish, plankton, crustaceans, or other marine life.

Earlier we talked to a park official who told us of a first-time visitor who was so excited because he saw whales, bears, and moose – all while walking this trail. We came close to having the same experience. Twice we stopped to chat to other hikers who asked if we had seen the bears which had just crossed the trail a few minutes before we arrived. Then near the end of the trail another hiker spotted a moose, which we again missed by only a couple of minutes.

The main part of the trail ends at the Cap-Gaspé lighthouse, now solar-powered and fully automated, at the end of the peninsula. Originally built in 1873, the wooden structure burned in a fire in 1892. Its replacement collapsed in 1946 in strong winds and harsh weather. The gleaming white concrete lighthouse we see today dates to 1950. This a great spot to relax in the Parks Canada iconic red chairs and have a picnic while enjoying the view.

But this isn’t quite the end of the trail. A sign points the way to Land’s End, where a narrower path leads to a lookout point on the edge of the cliff. It was so-named for the terminus of the International Appalachian Trail which runs along the Appalachian Mountains to Georgia in the southern United States.

Short and sweet, this trail is unusual in that it heads inland into the forest and away from the coastline, unlike most other Forillon trails. As the name suggests, a beautiful 17-metre high waterfall is the main attraction, although the entire route is pleasant as it winds through maple and cedar groves and through a fairy-tale river valley. While the trail is short and straightforward to walk, the intermediate rating is due to the many steep stairs both going down and coming up from the base of the waterfall.

Length: The length depends on which of the three trailheads you start from, with loop trails varying from 7.2 to 7.8 km. Instead of doing the entire loop, you can also opt to hike directly to the tower lookout (the trail’s main feature), then back down the same way, in which case it varies from 3.6 to 5.4 km.
Elevation gain: From 245 to 280 metres, depending on where you start.

This is the park’s most famous trail. Looking out from atop the Mont-Saint-Alban tower is Forillon’s iconic view. The shortest route is from Cap-Bon-Ami, not far from the campgrounds in the northern sector of the park. But here the route is almost straight up and especially steep. You can see the tower from Cap-Bon-Ami by looking up…way up.

We opted for the route from the Grande-Grave trailhead on the opposite side of the peninsula, along the road to Les Graves Trail. This is the longest though most gradual route, with a gain of 280 metres. There is nothing difficult about the trail, other than it being a constant climb up and up. At first it was a gradual incline, then the stairs began. It was step after step, and just when we thought it might start to level off, there were more stairs, and round every corner even more stairs. For most of the route we were in the forest, with occasional cliff-top lookouts as the views became increasingly dramatic.

When we finally reached the top and climbed the viewpoint tower, all of the huffing and puffing was worth it. We enjoyed a 360 degree view all around. The most spectacular was looking towards the cliffs of Land’s End, trailing off into the distance. In the opposite direction we could see the 34-metre Cap-des-Rosiers lighthouse, the tallest lighthouse in Canada. Inland stretched the heavily forested green hills of the park’s interior.

There a lot of great reasons to visit Forillon but the chance to do some reasonably short hikes through breathtaking scenery tops the list. We have never hiked anywhere else accompanied by whales.

For more information on Forillon National Park, visit the Parks Canada website. For details on other attractions in the region, visit the Quebec Maritime website, and also Tourism Gaspésie 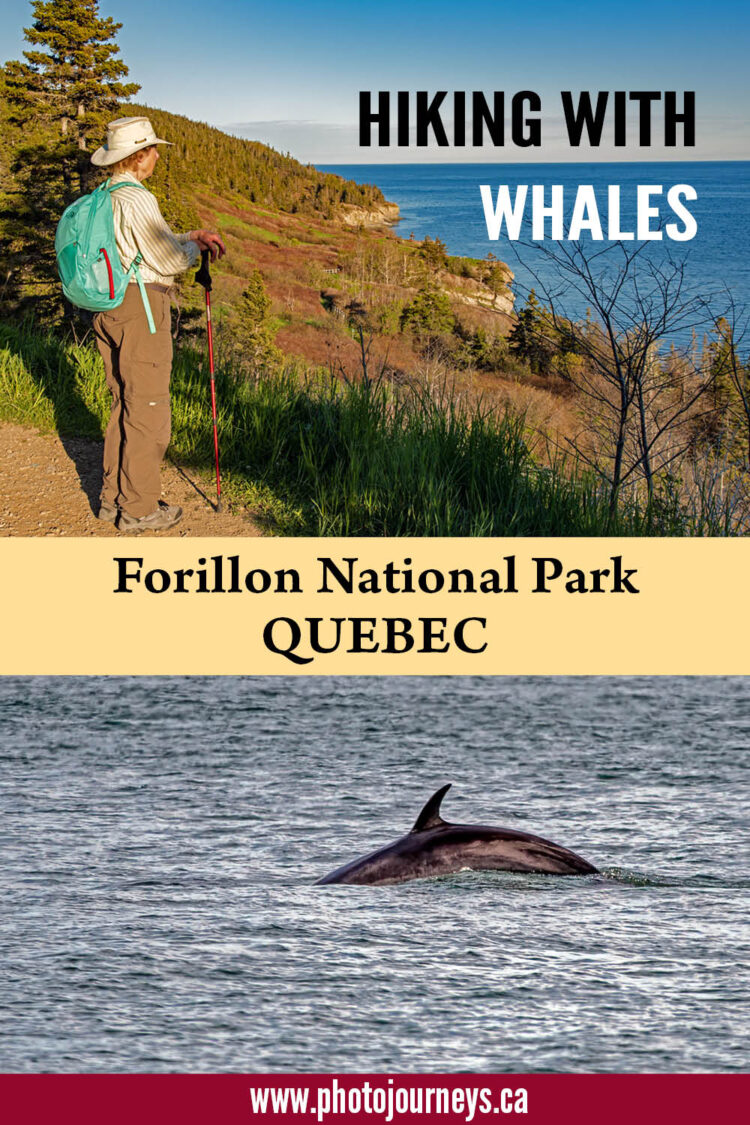