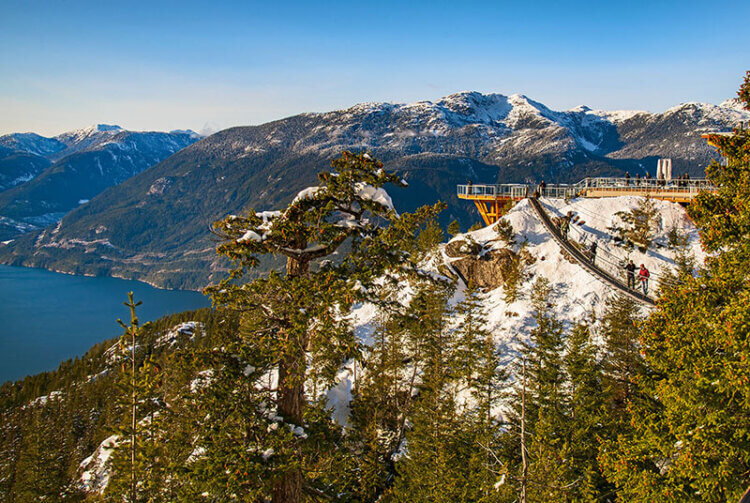 “Hardwired for Adventure”. That’s the tourism slogan for the small city of Squamish, British Columbia, located in a gorgeous setting at the end of Howe Sound with the sea, mountains, and river valleys at its doorstep. Depending on the season, there’s everything from hiking to biking, rock climbing, kayaking, sailing, skiing, wildlife viewing and more.

Part of the fun is just getting there. Squamish is about 60 kilometres north of Vancouver along the famous Sea to Sky Highway, one of BC’s top scenic drives. We follow the coastline of long, narrow Howe Sound, considered North America’s southernmost fjord. The scenery is non-stop with a series of bays, coves, and viewpoints along the way.

Squamish Beyond the Eagles

Our primary reason for coming to Squamish in winter was to see and photograph the annual bald eagle gathering, to which we devoted our last posting on the Eagle Extravaganza in Squamish. This ranks among Canada’s great wildlife spectacles as hundreds of eagles descend on the Squamish River, primarily in the nearby community of Brackendale, to feed on salmon.

The eagles could be around anytime from November to February, with December and early January usually being prime time. Even if you happen to be there outside the main eagle season, it is still worthwhile visiting the Eagle Run dike in Brackendale. This stretch of the Squamish River stays open throughout the winter and tends to attract a variety of birds and other wildlife such as harbour seals.

While it was eagles that brought us here, we discovered a wealth of other attractions accessible in winter. Several of those are just south of the city along the main highway.

Getting High on the Sea to Sky Gondola

Among the most popular attractions is the Sea to Sky Gondola. Starting at sea level at Howe Sound, it goes 885 metres up the mountain with sweeping views over Howe Sound and the surrounding mountains. Summit Lodge at the top has observation decks offering a different perspective of the landscape. If you get hungry or thirsty you can choose from the Co-Pilot Cafe specializing in sandwiches, the Marketplace Eatery for hot meals, or the Edge Bar which serves craft beer from every local brewery in Squamish.

We can get even more vistas along the extensive network of trails on the summit, many of which are accessible in winter depending on weather conditions. For some trails, it is recommended to have ice grips on your boots. The Sea to Sky Gondola website frequently updates trail conditions and has a webcam showing current conditions. A highlight of the summit is the 100-metre-long Sky Pilot Suspension Bridge that spans a deep canyon and connects the viewing deck at Summit Lodge with the start of some trails.

Also check out the nearby bird feeder which is often active. We found that it was a great place to get close-up photos of BC’s provincial bird, the Steller’s Jay.

The most easily accessible, as well as the most impressive, waterfall in the area is Shannon Falls. Plunging 335 metres, it is the third-highest falls in BC. The parking area to see the falls is immediately next to the Sea to Sky Highway, so it is normally open year-round. However, it could be closed in the event of high snowfall. Conditions are posted on the Shannon Falls Provincial Park website.

From the parking lot, an easy (although it may be icy in winter) 350-metre trail leads to the waterfall lookout. Along the way, we pass through a forest of western hemlock, Douglas fir, and western red cedar. When we visited, the understory was an amazing emerald green, even though it was winter.

Just up the highway from the falls is Stawamus Chief Mountain, named for the First Nations village of St-a-wamus near the Squamish River. With a granite dome rising 700 metres above the highway, it’s considered one of the largest granite monoliths in the world. Massive cliffs have made it famous for rock climbing while challenging hikes lead to the top. However, we can also enjoy this impressive mountain from ground level and while riding the Sea to Sky Gondola.

Going Underground at the Britannia Mine

One historic site near Squamish that shouldn’t be missed is the Britannia Mine Museum. Forget any preconceived notions of what a mining museum might be like. This is more of an experience than a typical museum, and we’re glad that we set aside several hours to take in the amazing underground tour and exhibits throughout the 10-acre site. Operating from 1904 to 1974, this was once the largest copper mine in the British Empire, with tunnels covering 210 kilometres.

After donning hardhats we climbed aboard train cars that rumbled along tracks through an early haulage tunnel into the side of the mountain. Once inside, our guide took us through the evolution of mining techniques and equipment, in some cases demonstrating how they worked. Especially fascinating was the use of some of the first lighting techniques in mines. In the early years, miners had to make do with a minimum of light while carrying out difficult and often dangerous work. Over the years lighting progressed from candles to strong and efficient LED bulbs.

After coming out of the mine, we headed into the 20-story-high Mill No.3, built into the side of a mountain and dominating the mine site. Originally used for processing minerals, it is now the site of the museum’s presentation called BOOM! The historic mill is brought to life through an imaginative combination of live-action and elaborate special effects. The production won a prestigious TEA Thea Outstanding Achievement Award, an international award by the Themed Entertainment Association that often goes to organizations the likes of the National Geographic Museum and Universal Studios.

Our most memorable adventure in Squamish was taking a flightseeing trip with Sea to Sky Air, recognized by TripAdvisor as the #1 Flightseeing Company in Canada. Our pilot David took us up in a Cessna 172 and only a few minutes after leaving the runway in the Squamish River Valley, we were in a completely different world. We soared over the wilderness wonderland of the coastal mountains with their white-capped peaks, glaciers, and hidden high lakes, one of which is Lake Lovely Water.

We swung around to the end of Howe Sound. We had bright sunshine around Squamish but Howe Sound was shrouded in clouds. David explained that this wasn’t at all unusual. Even though Vancouver and Squamish are not far apart, they often have completely different weather patterns.

Heading back to Squamish we flew over the top of the Sea to Sky Gondola that we had visited the day before. As we flew over Stawamus Chief Mountain we could see hikers who made it to the top despite the wintery conditions. In the distance was the city of Squamish, backed by the peaks of Garibaldi Mountain poking over the layer of clouds.

A distinguishing feature of Squamish is that we find the sea, mountains, and river valleys all nearby. From up here, we could see all those landscapes at once.

For further details on these and the many other attractions, check out the Tourism Squamish website.

Feel free to PIN this article on Squamish BC in winter 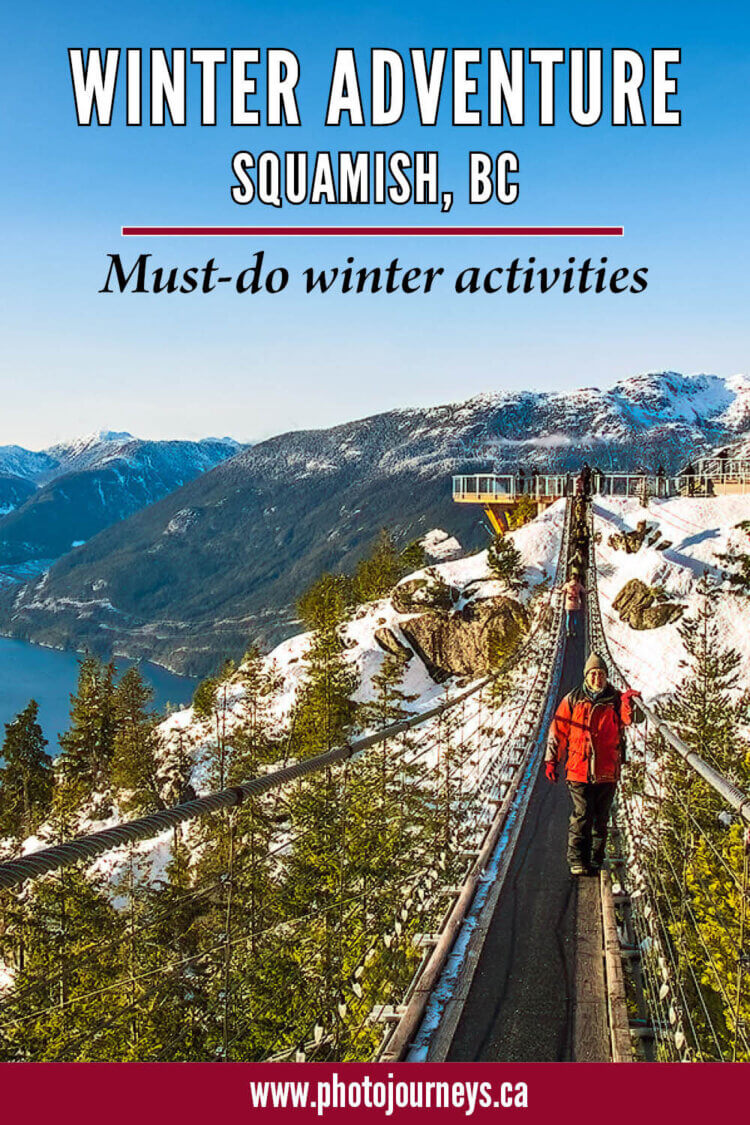