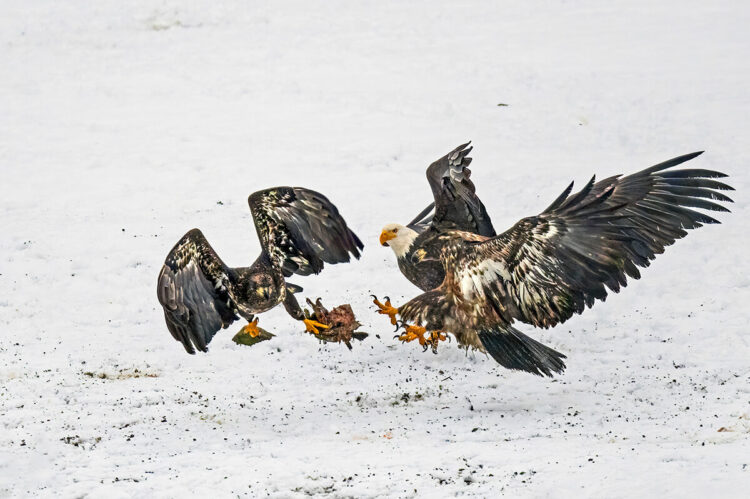 Squamish, British Columbia offers one of the top opportunities in the world to watch and photograph an impressive number of bald eagles at fairly close quarters. The community of Brackendale on the north end of Squamish even bills itself as the World Eagle Capital.

The main place to go is the appropriately-named Eagle Run dike in Brackendale. The best part is that visiting it couldn’t be easier. A road passes right beside the dike lining the east bank of the Squamish River. We can park at a small parking lot and then walk along the dike for over a half-kilometre with unimpeded views over the river.

The eagles come here because of the salmon that spawn between November and February by swimming upstream along Howe Sound to the city of Squamish at the mouth of the Squamish River. As they swim upriver and finish spawning, their dead bodies line the rocky shoreline. Bald eagles can go fishing for live fish, but they much prefer an easy meal that takes a lot less work. This fits the bill perfectly.

The area on the west side of the river is protected in Brackendale Eagles Provincial Park, providing habitat for the birds. Each time we visited, we saw eagles roosting in the trees, one time spotting five eagles in a single tree. While most eagles were across the river, it wasn’t unusual for some to roost in the trees that line the dike on the east side of the river. Often people walked by on the dike, unaware that an eagle was sitting right above them.

While photographing eagles sitting in trees or on stumps along the river is fine, it can’t compare with capturing some of the action. The bald eagle’s reputation for stealing food from other birds extends to trying to steal from each other as well. Often we watched an eagle peacefully eating a piece of salmon on the riverbank when another one or two, and sometimes more, would swoop in and try to grab some of the grub. Sometimes a bit of posturing would keep the competitors apart, but often squabbles broke out.

Sometimes eagles try to intimidate other birds. We saw one brave great blue heron wander through the gathered eagles, something the eagles didn’t like one bit. An eagle would often screech at the heron and try to scare it away, but this heron wasn’t intimidated.

The dike is a welcoming place to spend some time. A viewing shelter has picnic tables and interpretive displays on the eagles and the life cycle of the salmon. A few park benches line the riverbank and there is a toilet nearby. A restaurant is also located at one end of the dike. The setting is picture-perfect as we look over a broad curve in the river, with a backdrop of forest and snow-capped peaks.

During the height of the season, the eagles are monitored and counted by the volunteer organization, Eagle Watch. The day we arrived, we chatted with a volunteer who indicated that he counted about 100 eagles that morning. They frequently post daily counts on the Squamish Environment Society website. Over the years the annual eagle count has averaged around 1,300, with a world record set in 1994 at 3,769 eagles. If you’re keen to know more about eagles, the Society has an excellent posting with more fascinating eagle facts.

Other Wildlife Besides Eagles

While eagles steal the show, other wildlife also favour this stretch of the river which stays open all winter. We saw mergansers, a few different ducks such as buffleheads and goldeneyes, great blue herons, and plenty of gulls. Almost every time we came here we could see harbour seals swimming around.

How and When to Visit

Squamish is about an hour’s drive north of Vancouver along the Sea to Sky Highway. The Eagle Run dike is easily accessible and a short drive from almost anywhere in the Squamish-Brackendale area. From where were staying at the Executive Inn Suites Hotel it was little more than a five-minute drive to the dike. Besides being close to the eagle action, it was a convenient and comfortable place to stay because it had full kitchen facilities and underground parking.

Exactly what we might expect to see each day and throughout the day varies. On one visit we might see almost non-stop action while on the next the eagles could be mostly roosting in the trees. This is why it is important to allow enough time at the dike and to come back as often as you can. If you have enough time, also check out some of the other spots around Squamish that eagles often frequent, such as the Squamish Estuary or the Mamquam River near the golf course. Some of these sites are indicated on a map at the viewing shelter. Eagle Watch volunteers are usually the best source of current information.

While it can vary from year to year, the prime time is usually December and early January, although the eagles could be around anytime from November to February. Days are short at this time of year, and because we are surrounded by mountains, there are even fewer hours of sunlight on the river. During our December visit, we didn’t have enough light for photography until after 9:00 am, and by 4:00 pm the light was fading fast. Since we face west, we can sometimes get nice warm light on the birds when the rising sun clears the mountains.

A long lens certainly helps here. We used a 600mm lens most of the time, which was powerful enough to capture eagles in trees across the river and to get frame-filling shots on the riverbank. We used a video head on the tripod to provide more flexibility in getting action shots. Don’t worry if you don’t have super long lenses. It’s still possible to capture a lot no matter what your equipment may be.

We found that fairly high ISO settings were necessary except when we had full sunlight on the birds, which wasn’t often. High ISO was also necessary to get a fast enough shutter speed for sharp images of action, such as flying birds or eagles squabbling on the shore. Usually we used manual settings for aperture (opened as wide as it will go) and shutter speed (usually 1/1600 sec. or faster), and set the ISO on auto. With a fast shutter speed and often muted light, the ISO was often quite high, sometimes resulting in a fair amount of noise in the images. However, we consider this the lesser of evils. We would rather have a noisy image that we can correct to quite an extent in processing, than an out-of-focus image due to a low shutter speed, which cannot be saved. Our posting on using Auto ISO has more information on this technique.

Of course, there is certainly more of interest in Squamish besides eagles, and that will be the subject of our next posting.

For more information on Squamish, including guided excursions to see the eagles, check out the Tourism Squamish website.

Feel free to PIN this article on the Eagle Extravaganza in Squamish, BC 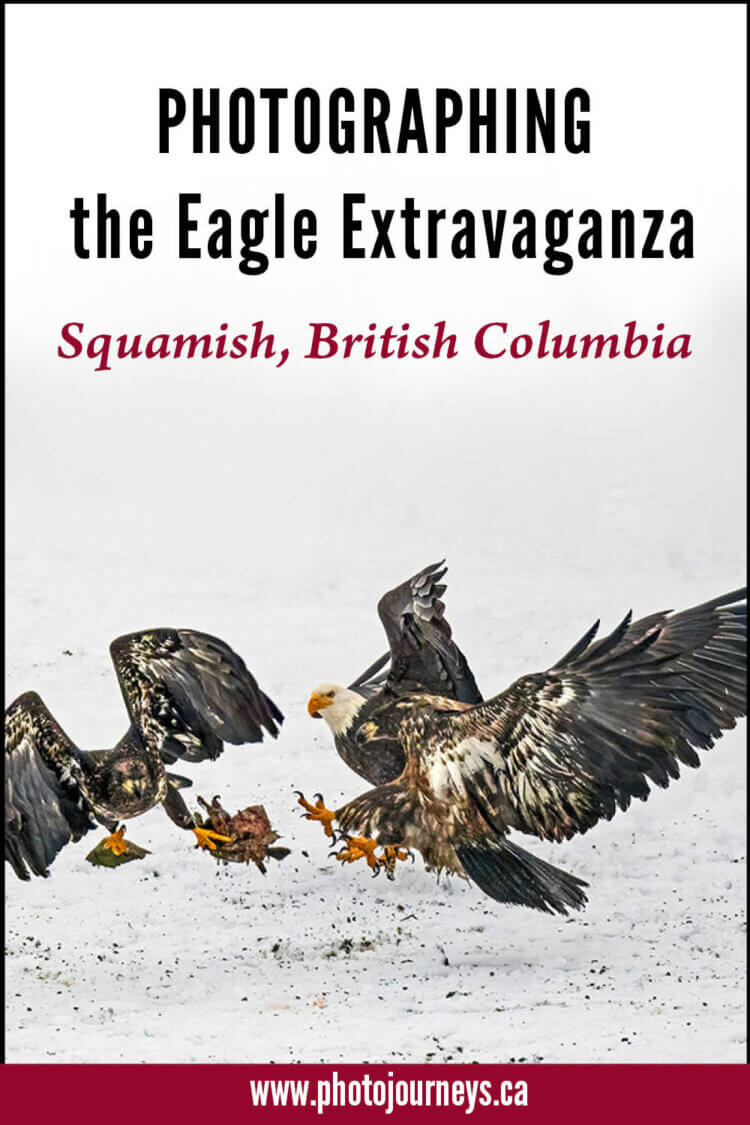