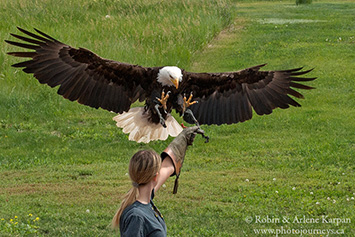 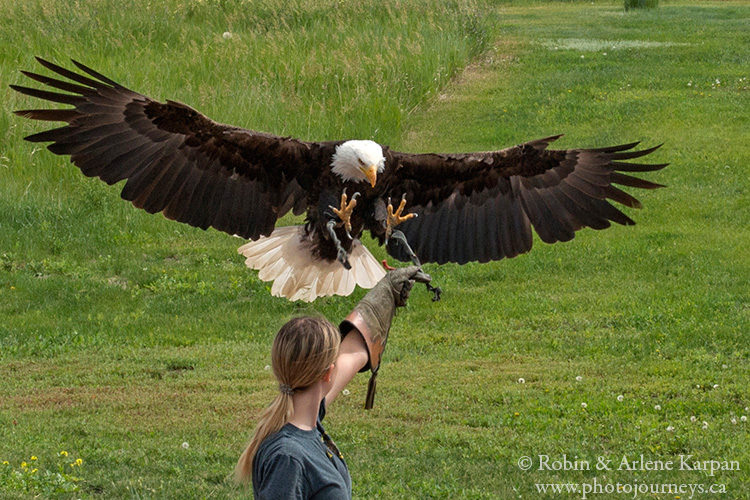 Lincoln the bald eagle perches on Allison’s outstretched arm and waits for a signal. Suddenly he takes to the air and in a matter of seconds reaches the arm of a second handler in the distance. His reward, a tasty bit of fresh meat. Then, swoosh; and he’s back on Allison’s arm as she describes eagle behaviour to gathered visitors. 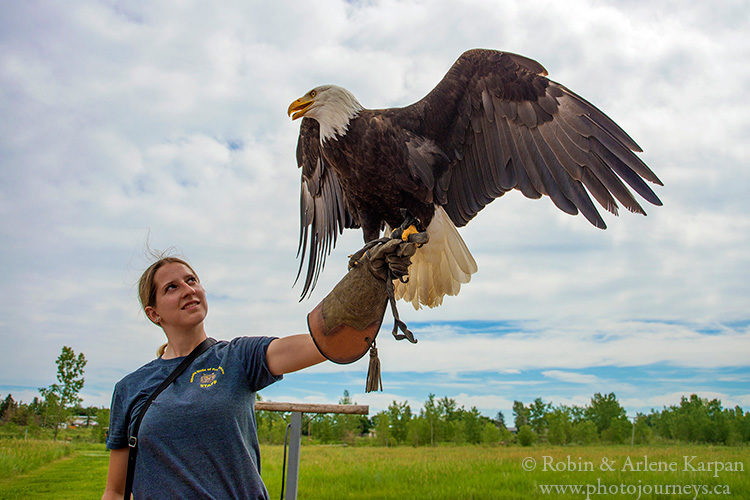 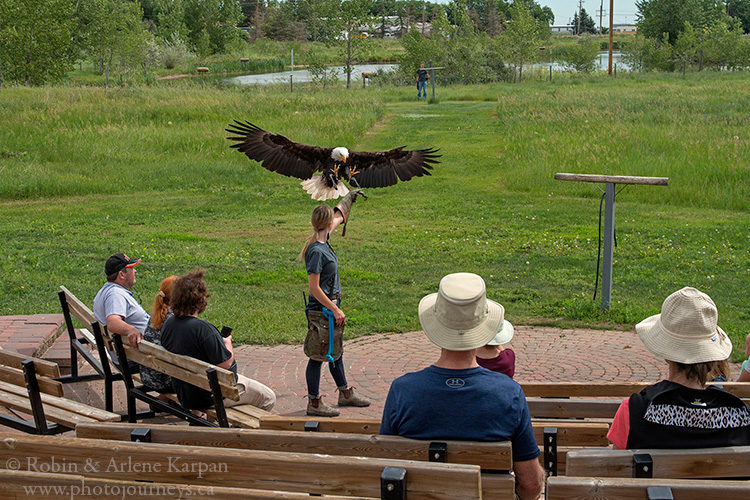 Lincoln is one of many birds of prey, large and small, that have been taken in by staff at the Alberta Birds of Prey Foundation in Coaldale, Alberta. Founded in the late 1980s by Colin Weir, the centre has grown into a facility that not only cares for and rehabilitates injured birds of prey, but also plays an important role in education and tourism.

Originally an accountant in Ontario, Weir became fascinated with falconry and thought about using falconry techniques to rehabilitate birds of prey and release them back into the wild. When he gave up his accounting career to move to Alberta and start a wildlife facility, there were those who likened it to running away to join the circus.

It wasn’t an easy goal, and Weir and his partners faced skepticism about starting a facility based on what was a new concept at the time. The site on the edge of town was originally a wetland drained for agricultural use. Prone to flooding, it wasn’t all that productive, so it was designated as a regional storm water retention area. “We proposed building a storm water pond that was also a wildlife rescue centre, reclaimed wildlife habitat, a place for wildlife viewing, an environmental learning facility and tourist attraction,” said Weir.

Eventually, they gained the co-operation of Alberta Environment, the County of Lethbridge, the town of Coaldale and organizations such as Ducks Unlimited to restore the wetland. The St. Mary’s River Irrigation District agreed to provide water to help stabilize levels. Today it’s lush and green, and teeming with wildlife. The project earned the Foundation and Town of Coaldale a Canada Environment Award from Canadian Geographic.

For visitors, the draw is getting up close and personal with magnificent birds that we normally see only from a distance. Or we can see rare birds, such as burrowing owls. In addition to flying demonstrations, there’s the Hawk Walk and Owl Prowl where Weir or his staff are often on-hand to provide information about the birds in these areas. Other birds are in aviaries, plus wild species such as ducks, geese and pelicans flock to the wetlands here because of the habitat.

Then there’s the fun stuff, like giving Lincoln a shower. After he’s done exercising on the flying range, he’s ready for a shower and visiting kids are often asked to help out spraying a fine mist over the gigantic eagle as he rests on his perch. Visitors can hold or touch many of the birds or have their pictures taken with them. Sometimes there are surprises, such as the day we arrived when staff were feeding a young abandoned kestrel by hand right in the visitor centre.

The main goal is to rehabilitate and release injured birds. Only those that can’t be released are used for demonstrations and interacting with visitors. The centre’s focus is falcons, hawks, owls and eagles of Alberta. “But we’ll never turn anything with feathers away,” said Weir.

Many birds are brought to the centre as a result of an accident. “Semis have had birds go through the front grill, birds get caught on barbed-wire fences, hit by cars, or they fall out of nests,” explained Weir. “Sometimes owls fly through open doors into houses and get trapped.” 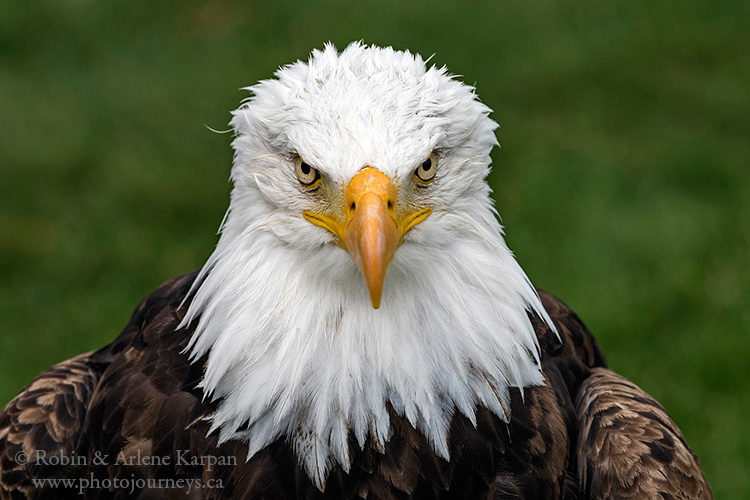 But Weir’s favourite rescue story is about a farmer who brought in injured owl chicks. He told Weir that the reason he was there was because he still remembered a school tour to the centre many years ago when he was in Grade 2.

We consider this an absolute must-visit when in southern Alberta. The Birds of Prey Centre is open from mid-May to Labour Day in September. Admission fees are $12, with discounts for seniors and children. Coaldale is just east of Lethbridge along Hwy #3. Signs on the highway show the way to the centre. For more details, see the centre’s website. For ideas on other fascinating places to visit in southern Alberta, check out the Canadian Badlands website. 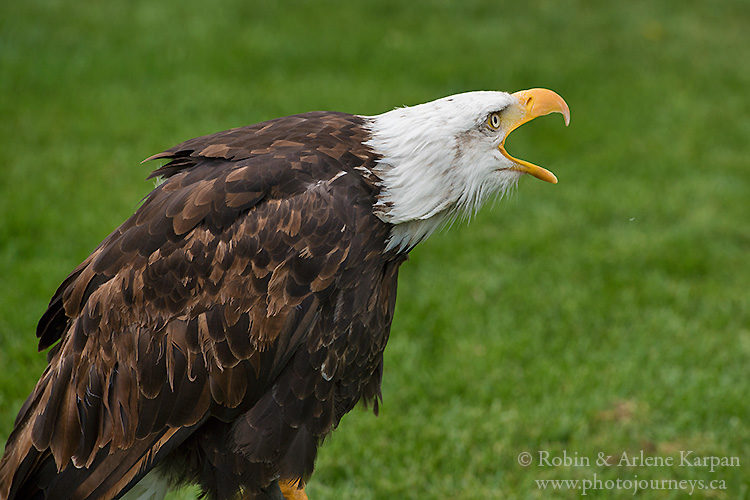 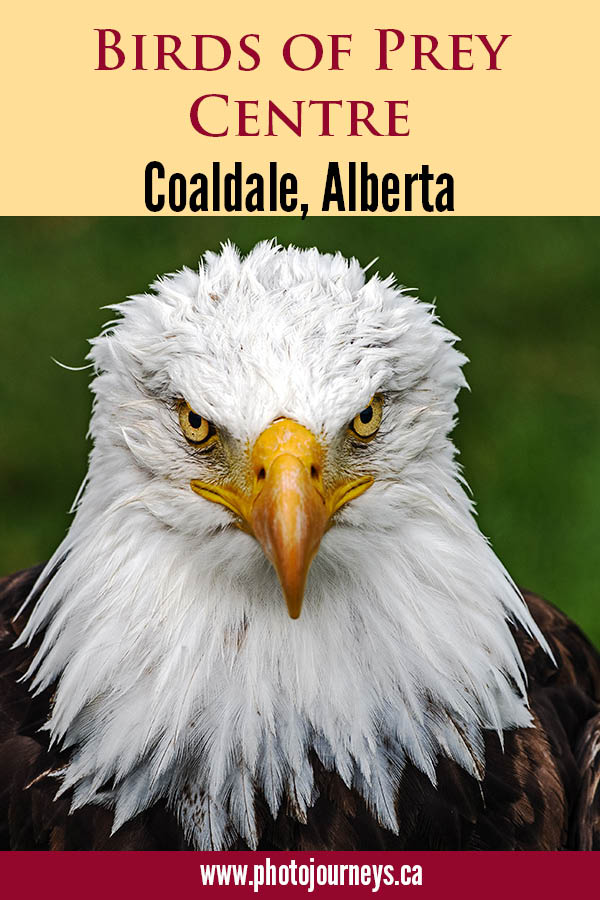