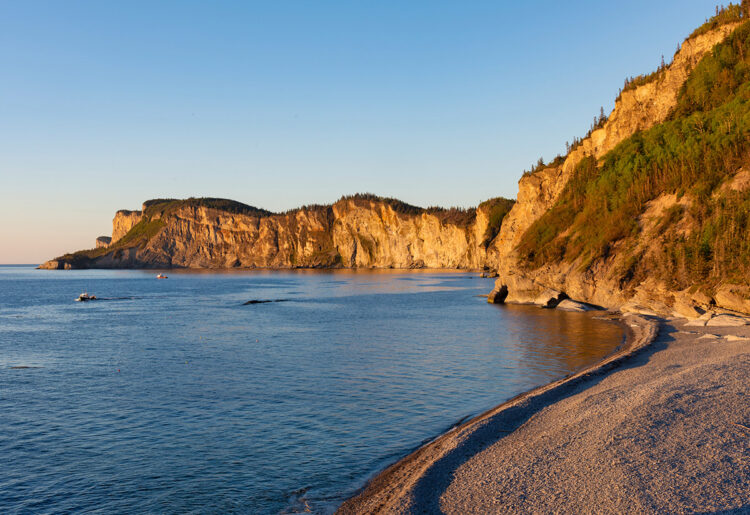 Forillon National Park is a remarkable place. While not very large, it packs in an incredible amount of biodiversity, drop-dead gorgeous views, wildlife, and adventure possibilities. The heavily forested park, lined by breathtaking cliffs, sits on the northeast point of Quebec’s Gaspe Peninsula, where the international Appalachian Trial ends in dramatic style at Land’s End. There are a lot of ways to enjoy the park. Here is our pick of the seven that you shouldn’t miss.

1 Marvel at the sunrise at Cap-Bon-Ami

If you get around to only one of these activities, this should be it. Not only is Cap-Bon-Ami the best spot in the park for sunrise, it’s among the best anywhere in Canada. It’s beautiful at any time of day, but at daybreak the rising sun hits the imposing cliffs and turns them gold. Cap-Bon-Ami is a popular lookout point but is practically deserted first thing in the morning. In fact, the morning we visited there was no one else around. Best of all, it is only a few minutes drive away if you’re staying in one of the campgrounds in the northern sector of the park.

The park is a great place to see a variety of seabirds – black-legged kittiwake, great black-backed gull, razorbill, common murre, double-crested cormorant, black guillemot, to mention only a few. One of the most convenient spots is the Cap-Bon-Ami lookout point. After you’ve seen the sunrise while looking south, turn around and look north to the cliffs near the viewpoint. Several birds nest on notches on the cliff face and here they are close enough for photography if you have a reasonably sized telephoto lens.

3 Take a hike, or several hikes

In our opinion, hiking is the top activity in Forillon. So much so that we plan to devote a separate posting specifically to our favourite hiking trails in the park. There is everything from short strolls to challenging backcountry treks. Some of our top picks include the hike to the spectacular Mont-Saint-Alban viewpoint, Les Graves Trail to the Cap-Gaspe lighthouse and Land’s End, and La Chute Trail to an impressive waterfall. But more about these in an upcoming post.

Forillon is a hot-spot for whale watching. Species that visit the nearby waters include the Minke whale, Fin whale, Humpback whale, and Blue whale. We took a cruise with Croisières Baie de Gaspé, based in the park, and we were fortunate to see several Minke whales, along with porpoises. And we didn’t have to go far to find them. The cruise is much more than whale-watching, incorporating a lot of different aspects of nature – how the rugged cliffs were formed, the differences between sighting a Minke whale or a porpoise, seeing seals basking along the shore, and identifying birds floating on the water or flying by.

In our opinion, seeing these huge marine mammals is only one of the reasons to take this excursion. The other is the chance to get amazing views of the Land’s End cliffs, something that is only possible from the water. You can hike out to Land’s End and to the top of the cliffs on Les Graves Trail, but views over the cliff faces themselves are limited. From the boat, it was as if we were gazing over an entirely new landscape.

5 Kayak through a seal colony

We welcome the chance to go kayaking anytime, but here we were able to combine paddling with great scenery and wildlife. Led by our guide Vincent of Cap Aventure we paddled along the southern shoreline of the park to an area where seals hang out. The remarkably calm waters were beautiful early in the morning. Travelling along the shoreline, we soon saw seals lounging on the flat rocks at the base of the cliifs. Young pups lay near their mothers, basking in the sunshine. Sometimes they called out, their voices echoing against the cliffs. Vincent was mindful of not disturbing the seals, yet letting us get close enough to have a good look.

At first it was difficult for us to tell the difference between the two species of seals. Vincent explained that Harbour seals are smaller at (5-6 feet in length), often have mottled or spotty skin, have a short dog-like snout, and V-shaped nostrils. By contrast, Grey seals are larger and heavier, (7-9 feet) have an elongated head, a flat forehead and nose, and W-shaped nostrils. Throughout the morning excursion, we also spotted some seabirds that commonly come to this area to nest such as guillemots, eider ducks, and other species.

Just outside the park’s northern gate stands the Cap-des-Rosiers lighthouse, the tallest in Canada at 34 metres high. This is the iconic landmark of the area, visible for long distances, including in many parts of the park. Built between 1853 and 1858, the tall cylindrical tower was originally covered in bricks and stucco but in 1984 was rebuilt with white marble. It has been recognized as a National Historic Site. During summer, it is possible to visit the inside of the lighthouse.

While we usually think of World War II being fought in distant lands, the Battle of the St. Lawrence took place just off these shores. From 1942 to 1944, German submarines sank 23 Allied ships, including some just off the coast of Forillon.

In response, the Canadian Navy established a naval base in Gaspe Bay. It would help protect Allied ships in the St. Lawrence and would be a haven for part of the Allied fleet in case of a German invasion of Great Britain. One of the coastal batteries was Fort Peninsula which has been preserved by Parks Canada and is open to the public. It’s located in the southern part of the park, near Penouille Beach, considered one of the park’s best beaches. The fort is a vivid reminder of just how close the war came to Canada. We can wander through tunnels and battlements and visualize what life must have been like for those stationed there. Two massive guns still point to sea from inside their concrete bunkers.

For more information on Forillon National Park, visit the Parks Canada website. For details on other attractions in the region, visit the Quebec Maritime website, and also Tourism Gaspesie 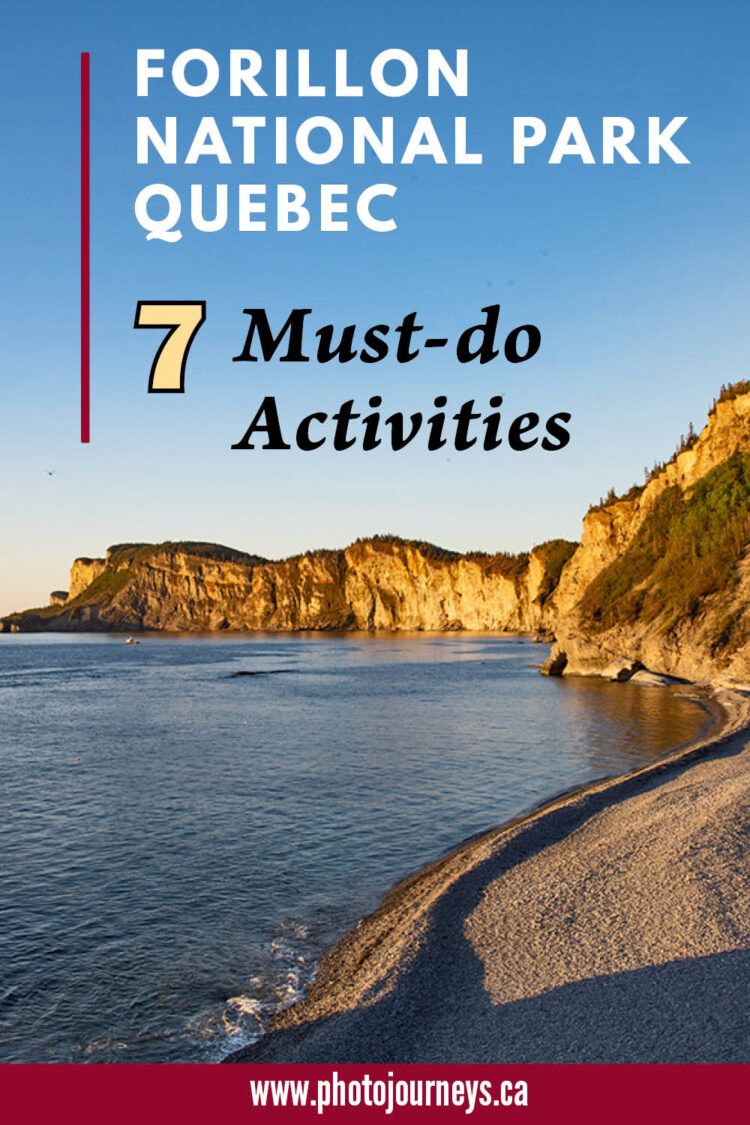 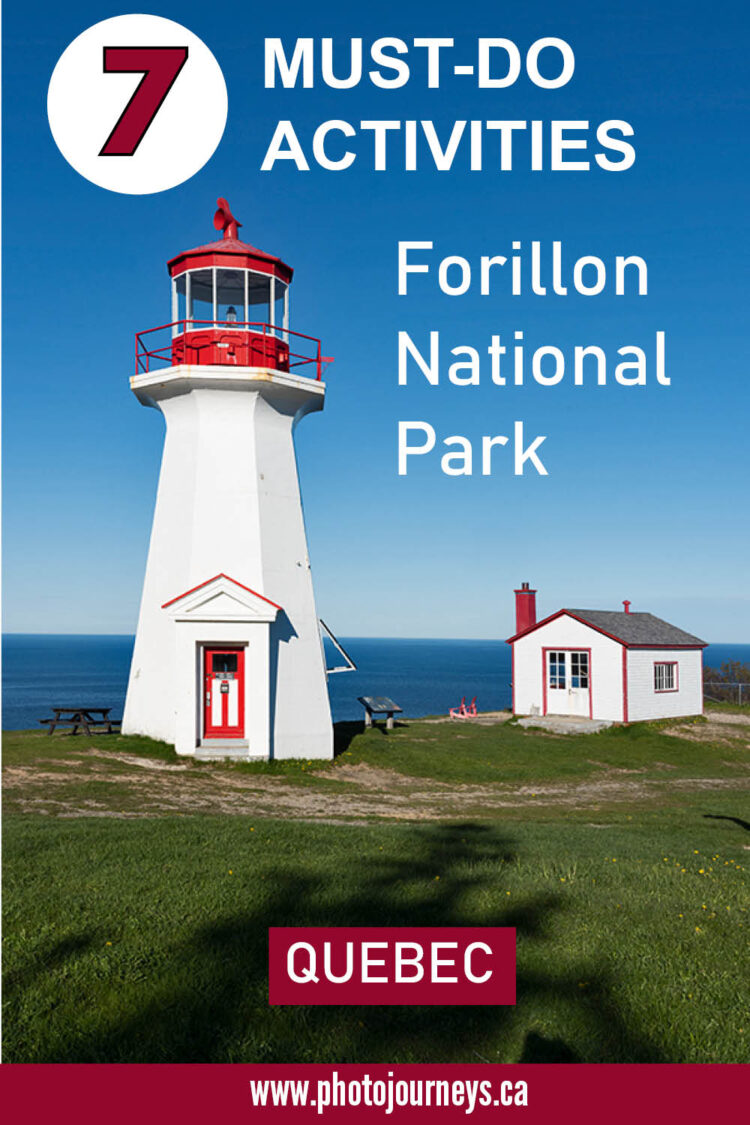