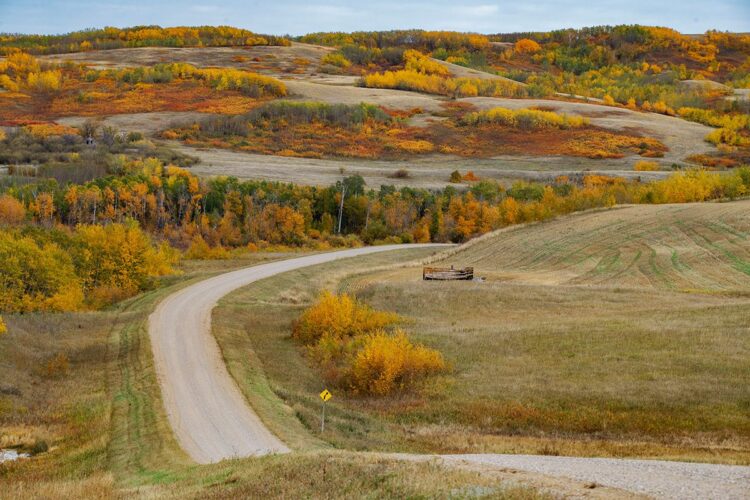 Fall colour season is almost upon us. Already we see the changes taking place. In Saskatchewan, the height of the season is usually around the third week of September, though every year is different, and there are variations in different parts of the province. There are many places we can go to in all parts of the province. Here are 10 of our favourites based on past experience, variety, and ease of access.

If we had to pick just one place in Saskatchewan for fall colours, this would be it. The hills are named for the enormous masses of rocks, soil, and debris pushed into ridges by moving glaciers. This gives us excellent vantage points over the mixed wood forest and lakelands.

While practically anywhere in the park is wonderful in fall, the one must-visit is the Narrow Hills Scenic Drive. Starting at the park’s core area at Lower Fishing Lake, the narrow road winds up a push moraine for 10 km, ending at a lookout point over the beautiful Grace Lakes. Along the way we look down over the seemingly endless forest, dotted with lakes. For more details check out our posting on the Narrow Hills Scenic Drive.

The other essential spot to go, especially if you like hiking, is the Gem Lakes in the northern part of the park, off Hwy 913. These five picture-perfect lakes named after gemstones have the uncanny ability to reflect dazzling shades of green and blue. During fall colour season, they reflect the hues of the foliage as well. You can walk the network of hiking trails around the lakes and stay at walk-in wilderness campsites.

It’s really a toss-up between Prince Albert National Park and Narrow Hills when it comes to our favourites in fall. We often visit both on the same trip. Almost smack in the middle of Saskatchewan, and straddling a transition zone between the aspen parkland and boreal forest, the variety of forests make for some great colours. For the rich golden hues of deciduous tree, we like the southern part of the park along Hwy 263, such as near Sandy Lake. Farther north in the park, a high proportion of evergreen trees makes for a nice mix of green and gold. The park is known for its many lakes and wetlands, and we often find the most stunning displays of colour along shorelines.

The park’s many hiking trails vary from short hikes near the core area to much longer trails. Our favourite fall hike is the Spruce River Highlands Trail, an 8.5-km loop looking over the Spruce River Valley much of the way. For more details see our posting Best Fall Colour Hike in Prince Albert National Park.

Our favourite short hike in the fall is the Boundary Bog Trail. For much of the 2-km loop, we walk along a boardwalk over a bog. Fall brings more shades of gold than practically anywhere else in the park. Much of this is due to the tamarack trees that dominate this wet terrain, their needles changing to a deep golden colour.

Next to Prince Albert National Park, this park offers more possibilities in similar lakeland terrain. We especially like Anglin Lake. Head to the bridge across the narrow part of the sprawling lake, where paths lead to the network of trails into the hills.

In the fall, we like to do this loop route which takes in both parks. Drive to Prince Albert National Park by way of the south entrance along Hwy 263. After visiting the park, leave by way of the north entrance which takes you past the trailhead for the Boundary Bog Trail. Once at Hwy 2, head south as far as the road access to Anglin Lake (Hwy 953). After visiting Anglin Lake, continue south on Hwy 953 which winds through the forest with access to Emma Lake, eventually meeting up with Hwy 263 near Christopher lake.

The eastern edge some has some wonderful forested terrain, with the area in and around Duck Mountain Provincial Park being a highlight. Our favourite drive for vantage points during fall colours is the Ski Hill Road, starting off Hwy 57 near the park’s core area, and heading south to the Ski Hill and Little Boggy Creek Valley. At the end of the road, also check out the Fen Trail, with a boardwalk taking you into a calcareous fen, where the special plants add to the variety of colours in fall. Also explore some of the roads south of the park, especially off Hwy 5 north and east of Runnymede.

This road runs close to the Manitoba border through the Porcupine Hills and includes Saskatchewan’s newest park – Porcupine Hills Provincial Park. The heavily forested area has several small lakes and a few campgrounds. A convenient way to access this area is to start at Arran along Hwy 49, a bit east of Pelly. Head north along Hwy 648, which eventually changes to Hwy 980. The road ends near Armit on Hwy 3, east of Hudson Bay.

Almost anywhere in the Qu’Appelle Valley is spectacular in the fall because of the mix of grasslands, hills, shrubs, trees, lakes, wetlands, and the river. The short stretch of road east of Craven is always a favourite, especially where you can explore the hills at Hidden Valley and see the picture-perfect church at Kennel. For the ultimate trip, you can follow the valley for close to a third of the way across Saskatchewan, with one scenic view after another. We have mapped out the route in our guide Saskatchewan’s Best Scenic Drives.

Any river valley is worthwhile checking out in the fall. But in Saskatchewan, the big daddy of them all is the South Saskatchewan, as it flows through mostly open grasslands in the western reaches, and becomes increasingly forested as it flows northeast. Some of our fall go-to spots include Chesterfield Flats, lined by massive cottonwood trees near the Estuary Ferry west of Leader; anywhere in and around Lake Diefenbaker, in and around Outlook; and in and around Saskatoon. Among our top fall drives is the Fish Creek Road backroads route between Saskatoon and Prince Albert, following the South Saskatchewan much of the way.

You don’t need forests for great fall colours. Prairie coulees can be even more colourful because of the array of shrubs and grasses that all bring their own hues to the mix. Practically anywhere in the southern prairies is a good bet, but one of our favourites is Saskatchewan Landing Provincial Park because it’s easy to access, and has hills where we can get excellent vantage points. Our main go-to area in the park is the Brunyee Coulee area, along the road east of the visitor centre.

The mix of landscapes and vegetation makes this park a winner. This is unlike anywhere else because we are in the southern grasslands but also in the midst of mixed forest. Plus the hilly nature of the land provides outstanding viewpoints. While every year is different, fall colours tend to last a bit later into the season here. One year, they were at their peak when we visited on Thanksgiving weekend.

Head to the Lookout Point and Bald Butte in the Centre Block of Cypress Hills Interprovincial Park, and practically anywhere in the West Block. The drive along Battle Creek Valley is a definite highlight.

Practically anywhere in the aspen parkland is great for fall colours. Among our favourites is the Thickwood Hills northeast of the Battlefords, because of the mix of farmland, pastures, and wetlands, along with substantial stretches of aspen forest and hilly terrain. One key route to follow is Hwy 378 between The Battlefords and Spiritwood, though this is an area where you practically pick a road at random and not be disappointed.


Also see our posting on 10 Ways to Improve Your Fall Colour Photography.

Feel free to PIN this article on Top Spots for Fall Colours in Saskatchewan. 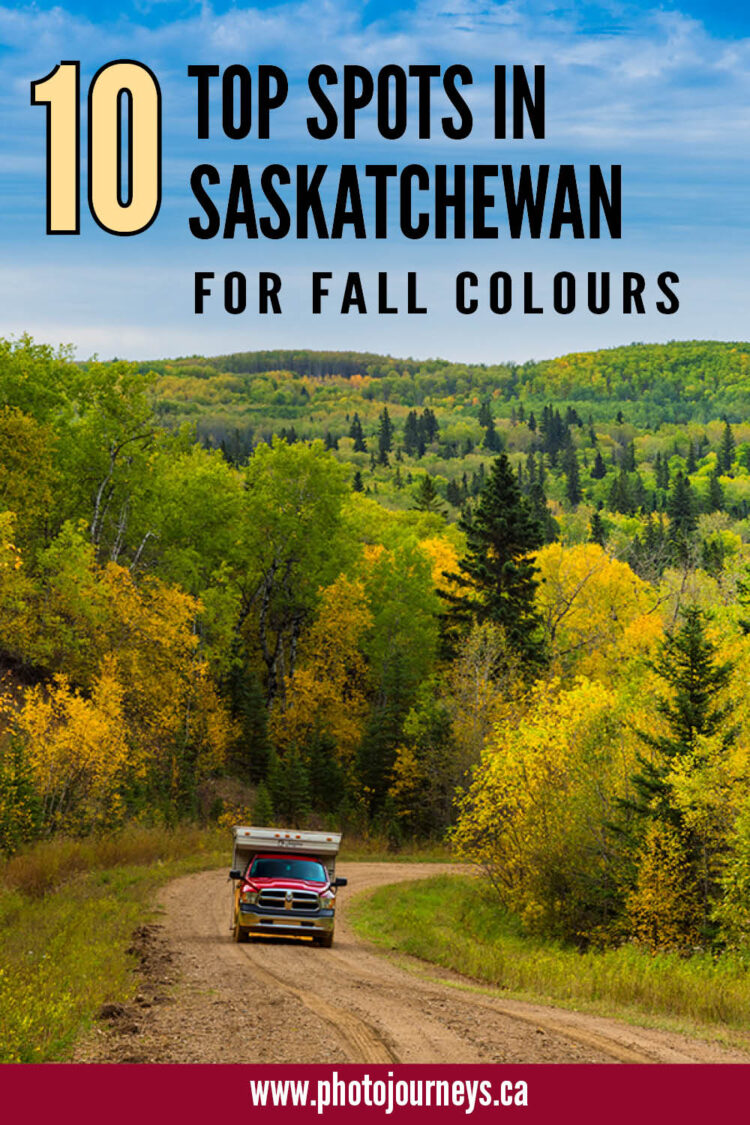