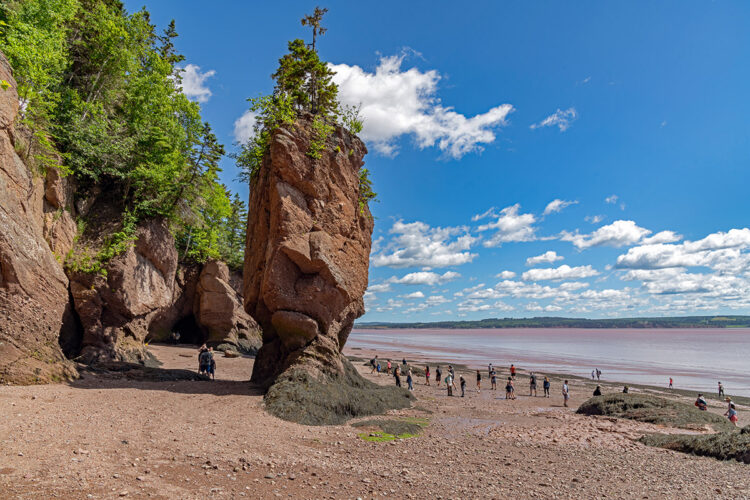 It’s for good reason that the Hopewell Rocks rank among New Brunswick’s top tourist attractions. Not only is it one of the best places to experience the famous high tides of the Bay of Fundy, but you do it in the midst of gorgeous coastal landscapes. High cliffs are lined by a series of sea stacks, also referred to as flower pots. These tall conglomerate formations, often topped by a clump of trees, have eroded and separated from the cliffs.

The look of these wild formations changes dramatically every six hours, thanks to the Bay of Fundy having the highest tides in the world. The average difference between low and high tide worldwide is about one metre, while in the Bay of Fundy it’s as much as 16 metres – about the height of a four-story building.

The high tides are partly due to the size of the bay, about 250 kilometres long, and its unique funnel shape. The deeper we go into the funnel, the more dramatic the change in tides. Then there’s the immense volume of water that surges in and out of the bay twice a day – more than the flow of all of the world’s rivers combined.

Walking on the ocean floor

Hopewell Rocks Provincial Park is located deep into the funnel shape of the bay where the tide difference is around 14 metres. At low tide in mid-morning, we looked over the remarkable scene from cliff-top viewpoints, then descended the 99 steps on a metal stairway that took us to the ocean floor where we spent a couple of hours exploring this fairy-tale landscape of towering flower pots, tunnels, and cavern formations in the cliffs.

Visitors can wander on their own along a two-kilometre stretch or, as we did, take a guided tour with a park interpreter to also learn about Hopewell’s fascinating history, geology, and flora and fauna.

The rock formations that we see today had an eventful past. They were formed over 350 million years ago as a huge mountain range was eroded by wind and water. Deposits melded into a conglomerate that some describe as looking like a bad cement job. The mass was then uplifted as much as 30-40 degrees by Earth’s tectonic activity.

The park is known for its special birdlife. A pair of peregrine falcons nests each year high on the cliffs. But the real show comes in late summer, at the end of July and first part of August, when hundreds of thousands of semipalmated sandpipers stop by to feed on the tasty buffet of mud shrimp on the mudflats that are exposed at low tide. During their time here, the birds often double their weight, storing energy to fly as much as 72 hours nonstop to their wintering grounds in South America.

An interesting installation at the far end from the staircase is the Emergency Tower. Park staff make sure that visitors clear the area before high tide when there is no more ocean floor to walk on. But in case someone gets missed or tempts fate by staying too long and finds the way back blocked by the fast-moving incoming tide, the tower is there as a last resort. Anyone in that predicament would climb the tower, which is above the high-water mark, and wait for eventual rescue by boat, or stay put until the next low tide.

Later that afternoon at high tide we returned to the same area, only this time by kayak, guided by the folks at Baymount Outdoor Adventures. It started with a safety briefing and some basic instructions. Visitors were outfitted with tandem sea kayaks (the guides used solo boats) with rudders and spray skirts.

Normally we would get into a kayak while in the water, but here we got in with only the bow of the kayak nosed into the water. “Don’t worry – you don’t have to paddle into the surf to float,” said our guide. “Let the water come to you.” A couple of minutes later, the rising tide took us away, with only a quick push from the guides.

Conditions were windy with some fun waves to negotiate on the short paddle to the cliffs. When we arrived the landscape looked completely different. The sea stacks that we walked past just a few hours ago had only their tops visible above the water as we paddled amongst them, sometimes passing through the tunnel-like formations. We paddled past the stairway that we took earlier to the sea floor, its base partially under water. Here more than anywhere we get an appreciation for what the world’s highest tides can do.

Hopewell Rocks Provincial Park is located less than 40 km south of Moncton, New Brunswick’s largest city. Other Bay of Fundy attractions such as Cape Enrage and Fundy National Park are a short drive along the coast southwest of Hopewell Rocks.

The entrance fee (currently $14 adults, $12 seniors and students, $8 children) is good for two consecutive days, making it more convenient to be there for both high and low tide. The park website has a tide chart to plan your visit in advance.

An interpretive centre helps set the stage and allows you to delve deeper into the phenomenon of the Fundy tides. The large restaurant in the same building is handy if you want to spend the entire day at the site in order to see the tide at different levels.

The interpretive centre is located on top of the rocky cliffs, with some excellent viewpoints over the terrain, especially the vast expanse of mud flats as far as you see on the ocean floor during low tide. A walking trail of around 800 metres, mostly through forest, takes you to places where you can access the ocean floor. There’s another great viewpoint along the way. For those who have trouble walking, an optional shuttle service is available as well.

At the end of the trail we come to the 99-step staircase that leads to the ocean floor at low tide. Yet another option is to continue walking a bit farther past the staircase to North Beach where you also access the ocean floor.

Timing is everything. Be sure to check tide tables online before arriving so you can plan your visit. The site is quite extensive, plus you have to allow for the walk between the entrance and the ocean floor, so be sure to allow sufficient time. We spent almost the entire day at the site.

Various accommodations are available in the area, plus several choices in Moncton, less than a 40 km drive away. But to treat yourself to a special splurge, an excellent choice is Innisfree Bed & Breakfast, only one km from Hopewell Rocks. The restored 1847 farm house sits on 10 acres of land, with gardens and forested trails. The five well-appointed rooms and suites tend to get booked up well in advance during tourist season.

Besides being a pleasant and comfortable place to stay, Innisfree also has a reputation for its food. Gourmet breakfasts are included with the room, plus guests can also opt for evening dinner. Innisfree owner Darren Mahussier is a Red Seal Chef with a special passion for local seafood, his signature dish being Lobster Tail Seafood Pasta. The slogan on the B&B website is “Come for the Rocks and Enjoy the Cuisine”.

Feel free to PIN this article on Hopewell Rocks, New Brunswick for later 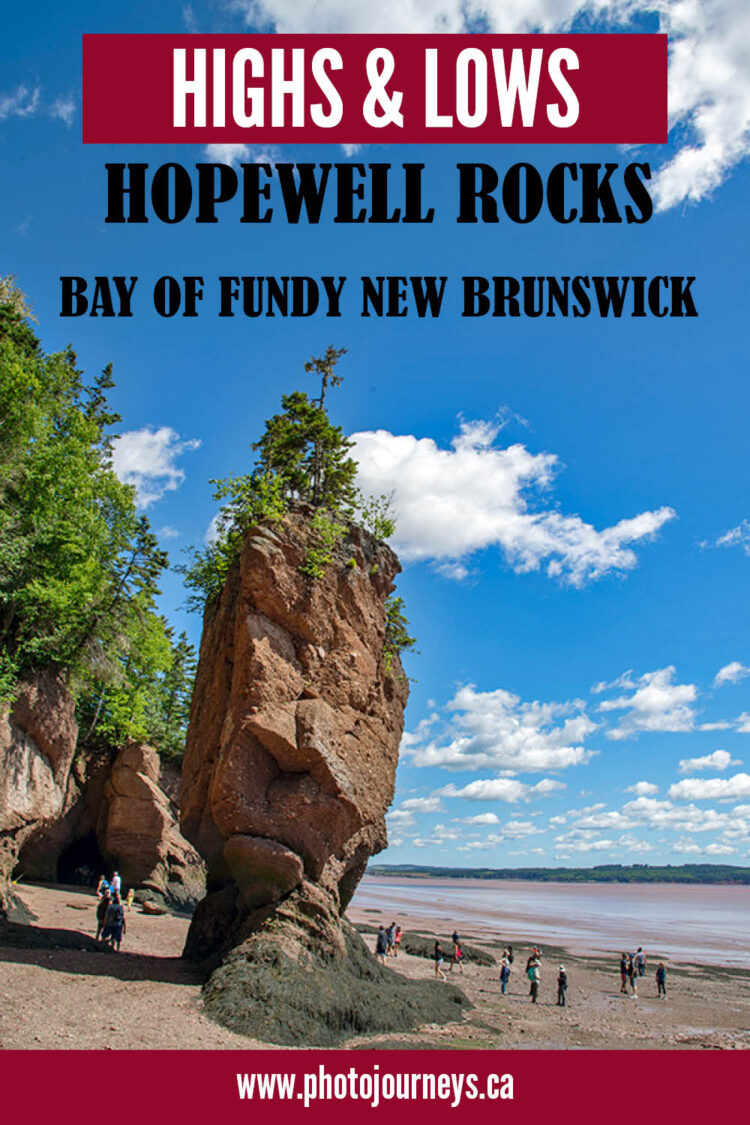 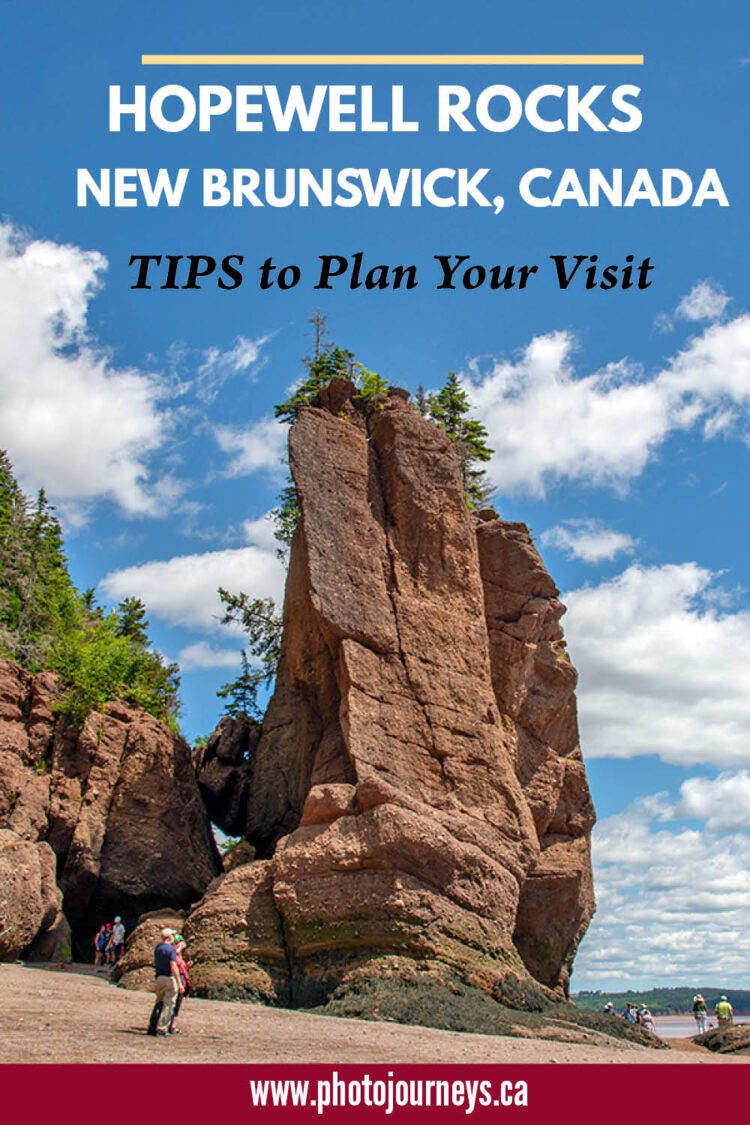