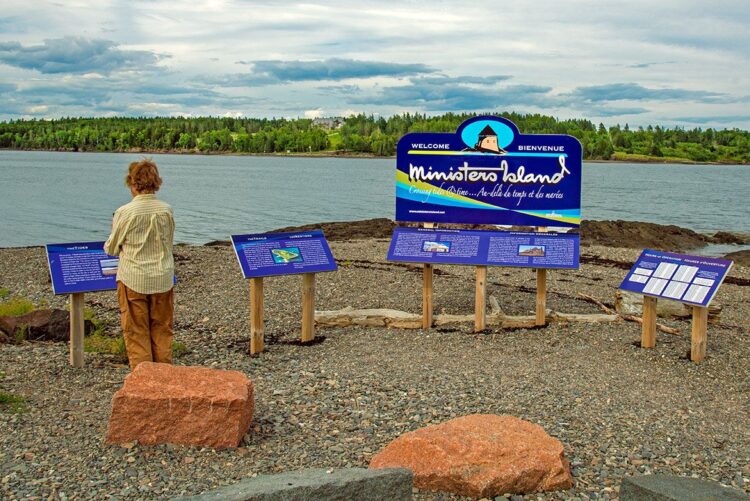 We drove our car to Minister’s Island in the ocean near St. Andrews, New Brunswick but we didn’t take a ferry, bridge, causeway, or use any other man-made facility. How we got there was the most intriguing part of the journey, and one that is unique in Canada.

Minister’s Island lies off the mainland near St. Andrews, New Brunswick. Standing on the shore we gaze over to the island separated by a 1-kilometre stretch of water. To get there we were told that we should simply drive across the ocean floor! People do it all the time, assuming of course that you go at the proper time of day. Thanks to the Bay of Fundy’s famous high tides–the highest in the world–this narrow strip of land seems like a completely different world depending water levels.

Driving across the ocean floor

A tide chart posted on a sign tells you when the tide is lowest, meaning it is safe to cross. On the day of our visit, the earliest we could cross was around 10:30 am. But we arrived a bit earlier than that because part of the show is watching how quickly things change when the tide recedes. It was still an unbroken sheet of water when we arrived, but in a matter of minutes, small bits of land started appearing. A few minutes later bigger chunks of land were visible. Cars arrived and waited to cross.

While there were still large sections of water separating the visible land, a man wearing shorts arrived by foot and started walking across. It looked as if he was never more than around knee-deep in water.

Not long after we could see a narrow unbroken sliver of land appearing all the way across. The first cars started crossing, zigzagging so as get around pools of water left in the low spots. As the magically appearing causeway kept getting wider, we too headed out. It was a strange sensation driving onto the seafloor just minutes after it had been submerged. But there was no mud. The ocean floor had the consistency of packed gravel. There were some dips and rough spots, and we had to zigzag around a few wet places, but it was a remarkably easy drive. Nothing has been done to prepare the route for travellers. It is a completely natural part of the ocean floor.

While just getting there is half the fun, the other half is experiencing the island’s rich history. The 500-acre island is named for a minister, Reverend Andrews, who built a house here in 1790. For the next century it remained in the Andrews family, then in 1891 a large parcel was sold to one of Canada’s most influential historic figures – Sir William Van Horne.

Van Horne is best known as president and builder of the Canadian Pacific Railway. He used the island to construct a grandiose summer home, Covenhoven, where the family lived from June to October each year. The house had 50 rooms with 17 bedrooms, 11 fireplaces, and 11 bathrooms. It is now preserved as an historic site where visitors can wander through and learn about the building and this larger-than-life historic figure with the help of on-site tour guides.

Van Horne liked to do everything on a grand scale. The room at the front entrance is expansive, as is the equally impressive dining room. Throughout the house are the trappings of the rich and famous, with the latest in modern conveniences, billiard room, and part of Van Horne’s large collection of intricate model sailing ships.

One of the more modest rooms is Van Horne’s personal bedroom. His wife, Lucy, had a separate bedroom upstairs though he liked to sleep in a relatively small room near the front entrance so that he could come and go at all hours without disturbing the household. A notorious workaholic, Van Horne slept only about three hours each night. He thought that sleep was a bad habit.

While Canadians tend to know Van Horne because of his association with the CPR, displays throughout the house also shed light on the man himself and his other endeavors. He was instrumental in railway building in Cuba and had numerous other business interests. He was an art lover and an accomplished painter in his own right – some of his works hang in the house. Displays highlight a few of Van Horne’s famous sayings, such as “The biggest things are always easier to do because there is no competition” or “Canada is doing business on a back street. We must put her on a thoroughfare.”

The grounds and barn

A short walk from the house leads to the bath house, an elaborate round stone building constructed into the side of the cliff. It was here that Van Horne did many of his paintings. Taking the curved staircase to the bottom, we arrive on the rocky seashore. A large rectangular depression is where some of the surface rocks were removed so that when the tide came in it became a ready-made swimming pool.

It would be hard to say which is the more grand building, the house or the barn. Indeed, it is the barn that provides the first introduction to the Minister’s Island. From the mainland we can partially see the impressive building with its two massive shingled silos and hipped gable roof looking somewhat like a French chateau. When we arrive on the island, the imposing barn is revealed in all its glory. The tour guide taking us through the barn suggested that Van Horne had the barn built in this particular spot mainly for this reason, so that visitors would be awe-struck when they arrived.

The massive barn that measures 25 metres high, 46 metres long and 17 metres wide was a state-of-the-art operation for the day. It had a creamery where workers prepared the milk and butter. It housed Van Horne’s prized Dutch Belted cattle and thoroughbred horses. Gardens and greenhouses produced a variety of vegetables and fruits. Not only did the operation make the island self-sufficient in food, but fresh produce and dairy products were shipped by rail to the family’s main home in Montreal…using Van Horne’s private railway cars of course.

It is recommended to allow at least two hours for a visit to Minister’s Island, but it is easy to spend a lot longer. Besides the house and barn, over 20 km of walking trails give you the chance to wander through natural areas of this beautiful island. A restaurant on-site is handy if your visit happens around mealtime.

Your time window to explore the island, the trails, house, barn, and other places depends entirely on the tides. Keep in mind how long you can stay before the tide returns and the crossing disappears once again.

Minister’s Island is operated by a non-profit community-based charitable organization dedicated to preserving the nature and history of the island. Recent admission prices were $17 adults, $15 students and seniors, with reduced rates for advanced booking online.

Also check our other postings on great travel spots in New Brunswick: 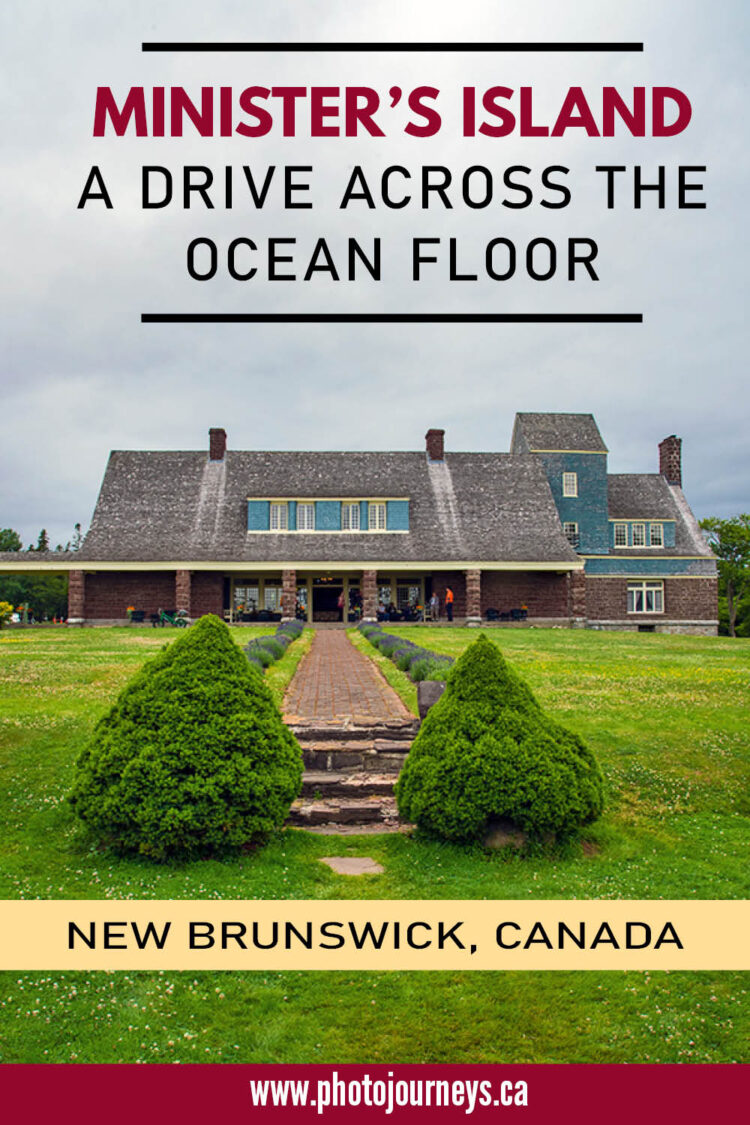