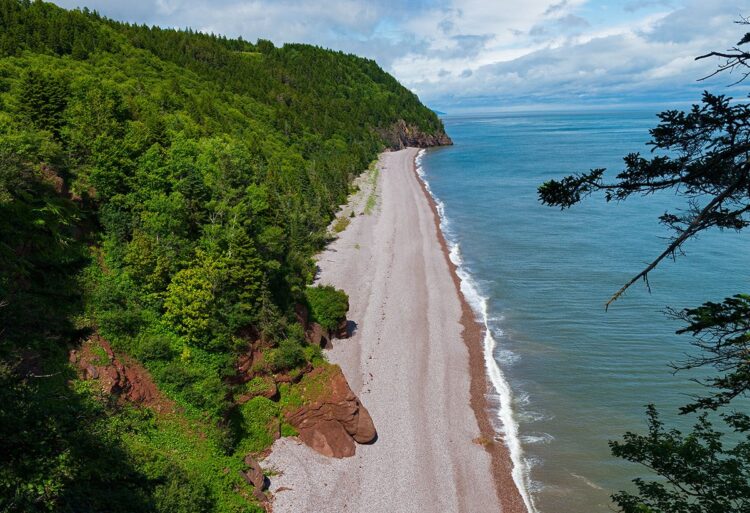 It’s much more than pretty scenery, however. The route is part of two UNESCO-designated sites – the Fundy Biosphere Reserve and the Stonehammer Global Geopark.

The Heart of the Bay of Fundy Coastline

The parkway itself is 30 km long. Besides the road, there are 35 km of hiking and biking trails and a connection to the famous Fundy Footpath, a challenging wilderness trail that Explore Magazine ranked as among the top 50 hiking paths in the world.

What really makes driving this route so enjoyable is that the parkway is not part of a regular highway with speeding traffic and heavy commercial vehicles. This is strictly a sightseeing route, with low speed limits where you can take your time to enjoy almost non-stop photo ops. A series of pull-offs, picnic sites, observation decks, and trailheads line the entire route. We visited in July at the height of the tourist season, but we were pleasantly surprised to find that the park wasn’t overly busy.

The road twists and turns as it meanders along the highlands overlooking the Bay of Fundy. In a few places, the road descends to the water’s edge, such as at Long Beach and where it crosses the Big Salmon River. Some of our favourite photo spots were the views over Melvin Beach, and Fuller Falls lookout just steps from the parking lot. For photographers, it’s not so much about specific places but rather the changing light. We had everything from full sun to thick fog and rainstorms, making for some dramatic scenes.

About 10 km along we come to an interpretive centre housed in a recreated bunkhouse similar to that used when the Big Salmon River was a logging, fishing and shipbuilding community. There’s also a Heritage Sawmill Display and a replica Cookhouse where, if you order ahead, you can pick up a lumberjack picnic meal to enjoy in the park. Hiking options abound in this area, with the most popular being the short stroll to the 84-metre suspension bridge across the Big Salmon River.

Walton Glen Gorge, near the eastern end of the parkway, is an undoubted highlight. Sometimes referred to as New Brunswick’s Grand Canyon, it’s an impressive sight with rugged vertical cliffs. A fairly short and easy trail leads to a lookout point where we peer down the expansive canyon and to the Walton Glen Gorge Waterfall on the opposite cliff. Plunging over 42 metres, it’s the second-highest waterfall in the province. It can vary from barely a trickle to an impressive cascade, and we were fortunate to see both. The first time we stopped there, the flow was quite light. Later that day and overnight we had a major rainstorm, and when we returned the next day it was as if we were looking at an entirely different scene as the waterfall was roaring away in all its glory.

Those wanting a true wilderness experience can hike the Eye of the Needle Trail, a technical and challenging trail that descends 180 metres down into the gorge and a narrow river canyon. It is recommended only for experienced hikers.

The parkway is run by a not-for-profit charitable organization. Recent admission prices were $11.50 adults, $10 seniors, $6.50 youth, or $40 for a family. Season passes are also available. The parkway is gated at each end and all visitors must leave by closing time. Other details such as opening hours, points of interest, and a detailed map are available on the Fundy Trail Parkway website.

There is no accommodation along the parkway. The most convenient place to stay is in the village of St. Martins, about 50 kms east of Saint John, and the closest community to the parkway. Besides being convenient, St. Martins is a worthy destination in its own right.

In the early years, St. Martins was one of the largest producers of wooden sailing vessels in the Maritimes, while today tourism is a mainstay of the economy. New Brunswick is famous for its traditional wooden covered bridges, with this small community boasting two of them. It’s the only place in Canada where you take a photo of two covered bridges plus a lighthouse all in the same shot. Well…usually you can. One bridge was being rebuilt during our visit so getting that iconic shot will have to wait until our next trip.

It’s a wonderful place to see the effects of the Bay of Fundy’s famous high tides. Fishing boats float in the harbour at high tide, then only six hours later at low tide, they look as if they’re sitting on dry land. St. Martins is best known for its striking red sandstone cliffs, some right on the edge of town. At low tide we can walk along the base of the cliffs and explore some of the massive sea caves carved into the rock. But we have to keep an eye on the tide charts and be careful not to linger too long. Once the tide comes back in, the caverns once again fill with water.

Despite being a small community, St. Martins has quite a range of accommodations from which to choose. We stayed at the Beach Street Inn, an attractive large heritage house that consistently gets glowing and well-deserved reviews. Its dining room overlooking the Bay of Fundy specializes in fresh-off-the-boat seafood.

For more information on other points of interest in the area, see Tourism New Brunswick.

Other articles on New Brunswick that you might enjoy: 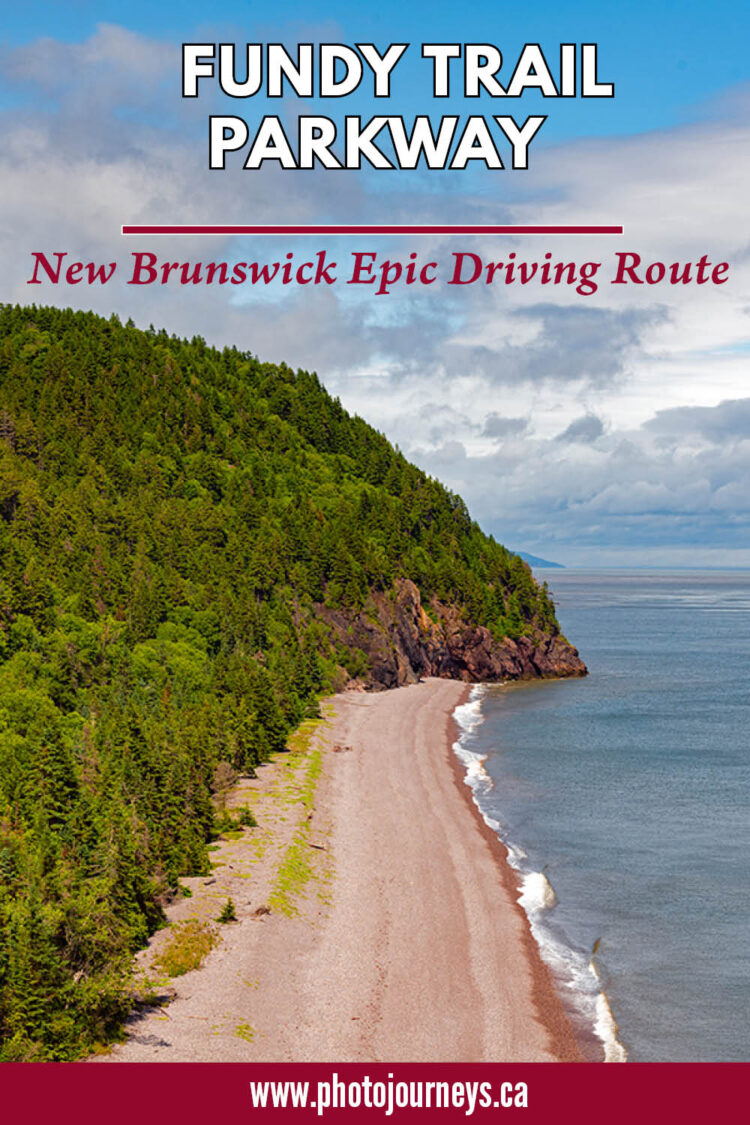